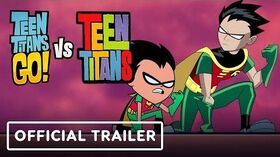 In Teen Titans Go! vs Teen Titans, the comedic modern-day quintet takes on their 2003 counterparts when villains from each of their worlds join forces to pit the two Titan teams against each other. With Raven struggling to battle with her inner demons, they'll need to set aside their differences and work together to save their Ravens by combating Trigon, Hexagon, Santa Claus (that's right, Santa!) and time itself in order to save the multiverse.

The film opens with the 2013 Titans battling the Gentleman Ghost as he attempts to rob a bank by possessing a man. He tries to get away scot-free by possessing Robin (who only regains consciousness after his four friends kick him) and then Starfire (who only reverts to normal after Raven uses her magic). When Gentleman Ghost attempts to possess Raven to escape, making the other Titans entertain themselves by compiling cards atop of her head and even doodling her face, he cracks her gem while exploring her dark mind, which unleashes some of her inner demonic power and results in his defeat and death. She doesn't recover from her demon self until she recognizes her friends. Her friends try to reassure her that everything is okay, but she is aware that she isn't, and then teleports herself back to the tower.

Back in her bedroom, Raven struggles to fall asleep, but as she travels inside her mind and ventures into the unlocked vault where her fractured gem is stored, her demonic self strikes her, startling her awake. Just as she floats towards her mirror, her reflection abruptly changes into her father Trigon, much to her dismay. He reveals that Raven's demonic half is slowly taking over her and offers to take it away, but she refuses to give it to him and flips the mirror backwards. Trigon doesn't give up easily though as he proceeds on explaining the process of her gradually turning evil, and she starts to feel perturbed. She still stands firm on rejecting him even after he shows her a projection of her being a powerless human and would rather stop using her powers, and shatters her mirror before storming out of her room. After Raven storms off, a malevolent voice speaks to Trigon and together they agree to continue conjuring their plan on turning Raven into a monster.

Meanwhile, Robin puts on a virtual reality headset in the living room, playing a stimulating game of him beating up his evil clone. But his game is disturbed when Cyborg grabs him up and toys with him, much to Starfire and Beast Boy's amusement. After discovering their mischief, he is quite irritated and decides to brag himself, though the others prefer Raven's "level-up". However, after Cyborg repeats "toast mode" for the second time, a portal is opened out of nowhere and Robin realizes that it is a multiverse crisis. Suddenly, the Titans are abducted by the Master of Games, a being who explores the multiverse with his Worlogog to find the best versions of particular heroes. He pits the 2013 Titans against the original 2003 animated Titans, who agree to fight after the Master of Games threatens to destroy their Earth, by kidnapping the 2013 Titans one by one. Cyborg and Beast Boy are the first to be captured, Starfire the third, Robin the fourth (owing to his lame improvised moves) and lastly Raven who can't escape from a person who also has similar powers like hers. Raven can only have a last look at the tower before she and her friends are being grabbed into the flying saucer.

After being forcefully taken into the saucer, the 2013 Titans find themselves in an unknown dimension with audiences. It turns out that the 2003 Titans are the masked people who caught them, and soon the two teams battle against each other after the 2003 team reveal their identities. At first, 2003 Robin thinks that he and his team should play soft until he decides to go rough when 2013 is offended and throws him a birdarang. 2003 Robin and Cyborg manage to take out all of the 2013 Titans with the exception of Raven, who is tired of the whole situation until she finds out she is barred from exiting. 2003 Raven is suspicious with how 2013 Raven is forbidden to leave, while 2013 Raven is furious and frustrated which cracks her gem further, worrying her 2003 counterpart. Unfortunately, she is coerced into unleashing her demonic power against the 2003 Raven, and she attacks ferociously in her demon form, knocking out the remaining guys from the 2003 team, and 2013 Robin mocks them without realizing the situation spiraling out of control. 2003 Raven notices that 2013 Raven is having her energy absorbed while attacking her, so she snaps her counterpart out of it when she realizes the Master of Games is siphoning her counterpart's demonic energy. The Master of Games, who traps the four other 2003 members while the 2013 Robin is frustrated with his remaining trio goofing around, reveals himself to be 2013 Trigon, who uses Raven's energy to resurrect 2003 Trigon. The two Trigons kidnap the Ravens and escape to the 2003 Earth to finish absorbing 2013 Raven's powers so they can conquer the multiverse. In the beginning the other 2013 Titans find it funny with the 2003 one lacking a leg, until the two Trigons divulge their nefarious plan and take the Ravens away. Fortunately, the two teams manage to escape but the 2013 Titans seem to have the dense nerve to remember how to land.

Upon 2013 Robin having an unsuccessful landing, the two group of boys begin arguing, so both Starfires reason with them, though the guys refuse to accommodate until the girls lead them to sing a rap (2003 Robin doesn't enjoy it though). The two Titans teams agree to work together to stop the Trigons and rescue their Ravens, though the 2013 team's antics confuses the 2003 ones. 2003 Robin deduces that the Trigons are using a Worlogog from their Earth to travel between dimensions, so they need a Worlogog from the 2013 dimension, which convinces Starfire and the two boys to accompany with him.

In 2003 Trigon's dimension, 2013 Raven is annoyed to see her father still babying her, and 2003 Raven is displeased with her 2003 father being alive again. 2013 Raven is angrily hurt by her father's actions, yet 2013 Trigon justifies himself by criticizing his daughter for being a heroine and hanging out with her friends, so he chooses to conquer the multiverse without her, and together the two Trigons plan to destroy 2003 Raven as well...though the 2003 one deems himself as the superior one, and coerces 2013 Raven to give him through violent means in vain.

On the other hand, Beast Boy and Cyborg are perplexed with their 2003 counterparts working themselves out and tell them to relax (with 2003 Starfire misinterpreting kick in and kicks the couch out), and to prove their point, they, along with Starfire, drag the 2003 trio into singing a song about Worlogog, impressing the 2003 trio.

As for the Ravens, they trick their fathers into unintentionally release them as 2013 Trigon struggles to give his 2003 counterpart a soda, and both reach the 2003 Earth. Knowing that she and her counterpart has to walk for a long distance, Raven is upset but has no choice since she doesn't want to spend time with her dad.

In the 2013 universe, 2003 Robin believes that everyone's fate is in his hands, until 2013 Robin's frequent interruptions irk him. The other members bond smoothly with one another though. As 2003 Robin knows that there's another Worlagog hidden in the 2013 universe (by labeling it as a copy), the 2013 Titans deduce that Santa Claus has the Worlagog, surprising the 2003 team. The 2013 Titans skillfully lurk into the Santa's house and take down his reindeer and the guarding elves, until Robin trips a wire, a part of Santa's plan! As a result, the two teams have to battle Santa and Mrs. Claus, Santa's secret weapon! Looks like it is only up to 2003 Beast Boy and the Starfires to take her out when the other boys are no match against her... At the meantime in the 2003 Earth, the Ravens come out from the shadow after 2013 Trigon scares off a man, but 2013 Raven can't go on. Instead of wanting to carry on, Raven thinks that it's better to leave her gem cracked, so her counterpart hopes to persuade her by telling her to accept who she is with the help of her friends, though Raven is still stubborn enough to choose walking even when her feet are full of pox.

The other Titans continue to battle fiercely with the Santa couple and their minions in North Pole. The 2003 Titans make their way out and successfully defeat Mrs Claus. The Cyborgs then combine themselves to become a dimensional-travelling machine and the two teams escape by using the device to travel between dimensions with the Santa couple pursuing them (confusing other dimensions' Titans during the process) and eventually make it to the 2003 Earth just after 2003 Trigon absorbs 2013 Raven's powers, even sending the Santas to face their fear of children as they are sent to 2013 Jump City.

The Ravens soon make it to the port and are about to board the ferry, but 2003 Trigon crushes it as he appears before them. They attempt to retaliate both of their fathers, only for 2013 Raven accidentally unleashes her demon self when she is about to help her 2003 counterpart, which leads to her powers being drained by the 2003 Trigon. At least the other Titans arrive, so 2003 Raven explains that 2013 Raven is weakened, but 2013 Beast Boy has no patient and just wants to check if the latter is okay, which turns out she is as she wakes up...not in the way he expects though, since she is actually cheery and thinks that he's handsome.

Raven being happy isn't a desired outcome for the 2003 Trigon anyway, and he interrogates his 2013 equivalent. Fed up with his counterpart's insults, 2013 Trigon absorbs 2003 Trigon's powers and transforms into a new powerful being named Hexagon. Well, in the beginning, their bodies being merged appears to be hilarious...until he charges his power. To combat this new threat, 2003 Robin uses their Worlagog to summon Titans teams throughout the multiverse. However, Hexagon proves to be too powerful, and worse 2013 Raven is too cheerful to understand the danger. She eventually evens the odds by absorbing all of her counterparts and transforms into a dragon known as The Unkindness, protecting the Robins and then proceeding to retaliate against Hexagon. The Titans destroy Trigon's Worlagog and assist Raven in getting her powers back, which gets rid of the 2003 Trigon. 2013 Robin uses their Worlagog to send 2013 Trigon to a zombie dimension.

That isn't the closure though...since 2013 Raven is engulfed by her demon form! But Beast Boy's concern reminds her to regain consciousness and she ultimately makes a consent with her inner self, gaining the control over herself (she still doesn't really like her friends' hugs).

After 2013 Raven accepts her demonic half, all of the Titans are sent home to their respective dimensions, and the two teams bid farewell, but 2003 Robin doesn't want his counterpart to come back and visit, upsetting the rest of the 2003 team. Upon returning to their Earth, the 2013 Titans are glad that Raven has upgraded herself and they don't have to endure another multiversal threatening crossover for at least another year... but they are attacked shortly afterwards by Darkseid, who they refuse to battle out of exhaustion. Cyborg is the only person who is later perturbed about Darkseid's conquer, although his younger friends can't care less. And everything ends with one of Darkseid's soldiers splattering on one of the glass windows...

Retrieved from "https://teen-titans-go.fandom.com/wiki/Teen_Titans_Go!_vs_Teen_Titans?oldid=430358"
Community content is available under CC-BY-SA unless otherwise noted.