The Teenage Mutant Ninja Turtles made a cameo appearance in "Más y Menos" after ordering pizza to a seemingly-deserted alleyway near a garbage dump.

The Teenage Mutant Ninja Turtles make their first major appearance in "Truth, Justice and What?" where Michelangelo suggests that Robin should use pizza to tempt and recruit Teen Titans members.

They appear later on in the episode and they have stolen all pizzas ever made. They encounter the Titans, and result in a battle with them. The turtles win at first, but the Titans use pizza, and with their energy and goofiness, they defeat the Teenage Mutant Ninja Turtles, and steal their shells.

The H.I.V.E. dressed as the Ninja Turtles.
Add a photo to this gallery 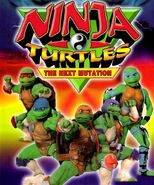 2018 Nickelodeon version
Add a photo to this gallery
Retrieved from "https://teen-titans-go.fandom.com/wiki/Teenage_Mutant_Ninja_Turtles?oldid=384806"
Community content is available under CC-BY-SA unless otherwise noted.