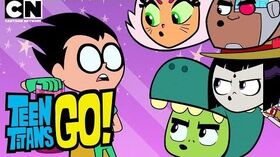 "Thanksgetting" is the forty-third episode in the fourth season of Teen Titans Go! and the two-hundredth overall episode of the series.

Constantly bored of the same traditions on Thanksgiving, the Teen Titans (Minus Robin) create a new holiday with their own rules & traditions.

It is Thanksgiving at Titans Tower and Robin is REALLY EXCITED!!! He sets out everything for a perfect Thanksgiving: mashed potatoes, cranberries, and even turkey! The other Titans don't seem pleased with the food selections though. Instead, they ask if they can have anything else to eat but Robin said that they need to eat because it is the number one tradition. The next tradition is saying what they're thankful for. Robin is thankful for his very heroic, an awesome butt with strong abs and for being the leader of the Teen Titans. Cyborg is next and he says he is “thankful” for having a not so great Thanksgiving (which is very rude) Beast Boy said that he was thankful for poop but Robin said that he cannot be thankful for such a disgusting word (especially when Beast Boy starts singing an annoying "poop" song) and lastly Raven says that she is thankful that she has a great friend like Robin, but Robin quickly realizes she said it sarcastically, which is meant also. Then finally, Starfire said that she is thankful that Christmas is only a month away but Robin excludes all of these rude, nasty “gratitudes” and moves on with the last tradition, arguing about politics...which leads to them having a fierce fight, causing half of the Tower to get damaged.

The four Titans (sans Robin) now argue that they cannot take such a tradition like Thanksgiving anymore so they decide to create a new era of Thanksgiving called "Thanksgetting". Robin warns them about changing the year tradition that they may suffer some serious consequences. But they move on with their own traditions starting with fancy costumes (Starfire as a cat, Raven dressed as a Swiss Yodeler, Beast Boy as a dinosaur and Cyborg as a cowboy) and announce that the next tradition is that they can eat whatever they want (burgers, burritos, cupcakes, and other foods were at the table) Robin said that they cannot do a thing like that but the other four moved on saying what they are "not" thankful for. Cyborg said bee stings, Beast Boy said paper cuts, Raven says it’s the sun (which she destroys purposefully though Robin points out they’ll all die without the sun) and Starfire said that she isn't thankful for Robin's "stinky" attitude (which is a nasty thing to say about someone for a friendly girl like her). Finally, the last tradition is the "getting" in which each of the four Titans "gets" something they want.

Robin is now very mad with them about changing the tradition, and it turns out that his earlier warning comes true when everything is halted because of that weird talking Thanksgiving Turkey getting "gobbled" up and trapping the Titans under its wings by binding the five Titans with an evil tree’s branches. Although Robin claims that his friends will be beyond sorry for changing the tradition, he still chooses to challenge the turkey as he witnesses how the turkey causes his friends to become sickened. After an intense battle, Robin defeats the turkey by throwing it into the oven and then into the ocean, even wishing it to have a good time in its water “gravy”.

After a monstrous defeat of the turkey, the four other Titans start to get very tired thanks to the traumatic experience. Nevertheless, Robin believes that this is a great Thanksgiving and is thankful for this year’s dinner. He then forces his friends to apologize in their slumber and wishes the audience a happy Thanksgiving. The episode ends with the turkey swimming to the screen while gobbling evilly.

The transcript for "Thanksgetting" can be found here.