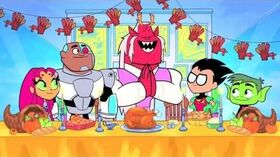 When Raven's father, Trigon, shows up for the Thanksgiving dinner, Robin’s seating plan isn't the only thing that gets ruined.

The plot starts with Robin setting the living room into Thanksgiving mode, by decorating it in Thanksgiving decorations, placing the dishes on the table with all sorts of food, including a delicious turkey dinner. The Titans pop out when they see Robin's preparations for the holiday, and eventually, they are about to dig in. However, Robin stops them from eating all the food until he says so, waiting for a special guest to arrive, whose name is Batman. He remembers working with him as a team in the past, which is why Robin needs to keep everything under control until Batman arrives. When Robin checks again on the food, he notices Starfire's traditional Tamaranian cauldron of soup, which he destroys.

The elevator door opens, and Robin expects to see Batman, but instead, he sees Trigon, an uninvited guest who wasn't even on the seating plan. However, Trigon doesn't come in as a demon, but he comes as a dad to make sure that his daughter has a perfect turkey day. Raven isn't amused by his presence, for she's expecting him to ruin the holiday. Trigon promises that he will never devour any souls this year, only the succulent turkey. Robin adds him on the seating plan after all, while Beast Boy tells Robin that he invited some extra guests too, which they were rats. Robin is horrified of his precious turkey dinner being devoured by the rats as he got rid of them, leaving the turkey dinner destroyed. Trigon offers to help him with another turkey dinner to replace it since he needs the biggest, strongest, meatiest Titan to join him in the kitchen. Cyborg accepts it since he's the right Titan for it, and they're off to the kitchen. When Cyborg asks how he is going to cook the turkey, Trigon tells him that it's a secret family recipe by turning Cyborg into a turkey which allows Trigon to cook him and eat him. He summons an ax while Turkey Cyborg fears him.

Meanwhile, Robin is still waiting for Batman to arrive and sees the table invaded with even more homeless rats after Beast Boy explained that the rats invited their own extended family. Robin demands him to get rid of them since he doesn't have enough food nor seats. Beast Boy tells him that they won't eat much, just only enough to fill their little rat bellies as the rats start to do the belly-dance. Much to Robin's stress, he lets them stay but no more excessive rats to join. Starfire pops out of nowhere in a football outfit, knocking Robin down on the floor with her ball since she's giving out a traditional Thanksgiving game by kicking the ball along with Robin away.

Raven enters the kitchen and she sees Trigon attempting to chop down Turkey Cyborg's head with his axes. Much to Raven's despair, she stopped him since she knew that her father would do anything to ruin her holiday. However, Trigon only wanted her daughter to have an actual turkey, but Raven states that eating one of her friends wasn't a part of the deal. Trigon grabs the turkey with him, believing that he tossed what she liked the least, while Raven likes Robin the least for being her teammate, taking with her the turkey back. Trigon says that they can eat Robin too, and that was the last straw for Raven making her mad while they both tried to grab the turkey Cyborg, but it escaped from their powers, allowing the turkey to fly away. Trigon goes after hunting it while Raven is chasing her father.

In the meantime, Robin is checking again on the decorations while Batman almost arrives, and surprisingly Turkey Cyborg passes him by along with Trigon and Raven, which made Robin spin around. He then sees a whole bunch of rats dancing together with Beast Boy. Robin yells at him that he shouldn't invite any more rats, while Beast Boy claims that it wasn't by his hand for it is the miracle of life by making baby rats. However, Robin is worried about how Batman would react if he saw the rats, for he knows that Batman likes only bats and not rats. Turkey Cyborg runs away again around the living room, followed by lots of axes thrown, and when he got cornered, Trigon was about to throw another ax at him, but he got stopped by Raven that changed the direction of his ax, making Robin shriek in despair.

Trigon summons a massive ax to kill Turkey Cyborg, and he punches Raven to the ground as she tries to stop him. Much to Raven's failure, she eventually lets her father eat her friend, for he never listens to her anyway, leaving with a sad expression on her face. However, when Trigon is about to stab Turkey Cyborg with a knife, his will was stopped when he saw Raven about to cry. That makes him give up on the turkey, for all he wanted was to make her a perfect Thanksgiving Day. He finally admits that eating one of her friends doesn't include this holiday to have a decent turkey dinner. Raven thanks him and tells him to transform Cyborg back to normal so they can return to dinner. However, Trigon reveals that he can't undo Cyborg's transformation, explaining that the curse has to wear off on its own -- and that won't happen until around Christmastime.

In the living room, everyone, including the rats, is at the table waiting to eat. Before that, Robin double-checked everything in preparation for Thanksgiving. When Starfire asked where he will sit, Robin forgot to put a seat for himself. But Beast Boy tells him that they saved one for him at the kid's table, which has a chair unstable enough that even made Robin fall. Starfire commences the Thanksgiving feast while Robin stops them from eating again until Batman arrives. When Raven asks him where he is going to sit, Robin answers that Batman sits wherever he likes and suggests saying what they are thankful for while they wait instead. Robin starts first by claiming that he's thankful for he was able to put together a perfect Thanksgiving, even though some people tried to ruin it, while Beast Boy is thankful for his cool new rat friends. Raven is also thankful in a sarcastic way, that her father turned Cyborg into a turkey, while Trigon is thankful to be there with her daughter even if she doesn't appreciate his gifts to her. Turkey Cyborg tried to speak as well but only in "gabble gabble" language, while Trigon agrees with him after complimenting enough to make him maniac again by attacking the turkey.

The Thanksgiving dinner table has been ruined for sure when turkey Cyborg ran on the table and splashed Beast Boy's and Raven's faces with food which that engaged a food fight. Starfire joins the fight as well as they hit each others faces with all sorts of food. Trigon chases the turkey again with axes and the rats are dancing in joy, while Robin watches the fight and goes berserk as his face gets also hit with a pie. Beast Boy laughing has made Robin to throw a pie at him, but he dodges and hits Batman in the face when he finally arrives after opening the elevator doors. Horrified to see him and to see his reaction, Robin shrieks as he runs away to his room.

While eating his dinner in his room, Starfire enters as she was worried about Robin. Believing that he ruined Thanksgiving Day, Starfire agrees with him. However, she thinks that everyone's terrible actions have helped her understand the true meaning of a celebration, and that is why she is thankful that Robin is their leader and her friend by her true passion. Making Robin happy, he is also thankful that she always makes him feel better for himself. He asked if she wants to help him clean out his mess which she accepted.

Back in the living room, Robin and Starfire see it all cleaned up, with its all preparations and decorations reassembled. He cannot believe his eyes but wondering who did it. As Beast Boy pops out from under the table, he says it was the rats since they don't have a place to go or food or even had a chance to see their family. Them being generous, they decide to bring everything back to normal because they had the best Thanksgiving Day ever along with a new feast, which Trigon, Raven, and Turkey Cyborg are thrilled to see again on their feet. Robin is wondering about the turkey, and Raven said that she and her father took care of it by turning Batman into a turkey.

The transcript for "Thanksgiving" can be found here.