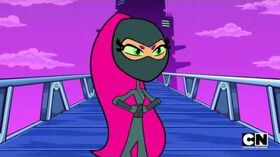 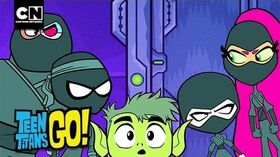 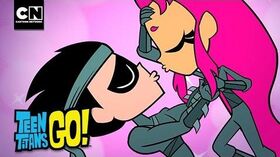 "The Art of Ninjutsu" is the thirty-eighth episode of the third season of Teen Titans Go!, and the one-hundred-forty-second overall episode of the series.

The Titans train Beast Boy to be a stealthy ninja just like them in order to acquire a well sought-after artifact known as "the McGuffin".

The episode begins with Robin, Starfire, Cyborg and Raven, dressed as ninjas, enter a fortress and defeat several robotic guards. Beast Boy, in pajamas, approaches them and says he believed they were having a slumber party. Cyborg tells him otherwise and reveals they're on a mission. Beast Boy mistakes their attire for footie pajamas, but Starfire tells him they're wearing the traditional ninja garb. Robin explains they're designed for stealth and are using ninja tactics to break into the fortress and retrieving a McGuffin. Beast Boy asks what a McGuffin is, but Robin simply says it is what they're after. When questioned again, Robin says it doesn't matter but that they have to move quietly. The Titans evade searchlights, but Beast Boy draws their attention when he finds a penny on the ground. Robin quickly throws shurikens to disable the searchlights and takes Beast Boy into the chamber where the McGuffin is being held. Starfire and Raven note that Robin still hasn't told them what it is, but he claims it doesn't require an explanation. Beast Boy heads to retrieve it, but Cyborg uses powder to unveil security lasers. The other Titans simply avoid the lasers while Beast Boy casually attempts to walk through them. He accidentally touches a laser, releasing several weapons that attack them and opening a compartment underneath them.

Back at Titans Tower, Robin tells the Titans that they failed to acquire the McGuffin but that they won't be giving up. Starfire, Cyborg and Raven are unsure about what a McGuffin is and Robin says it has driven and eluded him. The Titans are unable to understand, and Beast Boy says it doesn't matter as he claims ninjas are lame. Cyborg asks him to consider the cool stuff they did, but Beast Boy says he wasn't paying attention. The Titans show off their ninjutsu, disappearing in a cloud of smoke, hiding behind plants, wielding weapons and emerging from underneath the couch. Beast Boy asks that they teach him the art of ninjutsu and Robin agrees so long as he calls him master. Beast Boy initially refuses, but when the other Titans leave him by himself, he changes his mind and agrees to call him master. The Titans reappear and Robin says his lessons begin now.

The first lesson is disguise and Robin explains a ninja can hide in plain sight. He appears from behind a painting while Cyborg emerges from the wall. Beast Boy backs into Robin, but the Robin is simply a disguised Starfire and Raven. Raven then takes off a mask, revealing she is actually Robin. The next lesson is weaponry and Robin explains that ninjas are masters in both hand-to-hand and throw weapons. Raven says the most notable weapon is the shuriken which Beast Boy thinks is the reason Robin is short. Starfire explains that Robin was born short and that if he was shuriken, he'd be even smaller. Robin informs them that the shuriken is another name for the throwing star. Beast Boy tries to play with it, but is hurt by its bladed edges and throws it at Cyborg. Cyborg, without flinching, catches it, amazing Beast Boy. The third lesson is stealth and Robin instructs Beast Boy to walk upon bubblewrap without popping bubbles. Beast Boy, however, begins popping the bubbles on purpose and is joined by the other Titans. Robin tells Beast Boy to start training and afterwards, becomes a ninja.

At night, the Titans continue practicing their ninjutsu when Raven asks if they've seen Beast Boy. Cyborg believes he is acting stealthy and Robin prides himself in getting Beast Boy to embrace the ninja life. Starfire suddenly begins complimenting Robin and says that she is now in love with Robin. Robin begins crying out of joy, but Starfire reveals herself to be Beast Boy. Beast Boy claims that he is the master now and shows advanced ninjutsu though Robin tells him that the student can't become the master. Beast Boy decides to prove he is the master by getting the McGuffin before Robin though Robin says it is too important. He proposes a ninja race where the first one to retrieve the McGuffin proves himself as the master and Robin agrees.

At the fortress, Beast Boy tells Robin that he doesn't know what the McGuffin is, but want's it badly. Robin begins to speak, but Beast Boy uses the opportunity to get a head start. Robin sends Cyborg after him, but Beast Boy distracts Cyborg with a penny on the floor. Searchlights spot Cyborg and he falls through a compartment. Robin sends Starfire and Raven after Beast Boy, but he farts and knocks them out. Robin enters the room with the McGuffin and disables the lasers. He opens the chest and is joined by Cyborg, Raven and Starfire who are unable to reveal where Beast Boy went. Robin reveals the McGuffin is an egg sandwich and says he knew Beast Boy couldn't beat him as there's only one master. Beast Boy emerges from the sandwich and declares himself the master. The episode ends with a montage of Robin being overpowered by Beast Boy and later the other Titans.

The transcript for "The Art of Ninjutsu" can be found here.