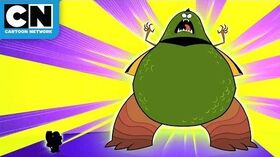 It's Cinco de Mayo and Robin learns that avocados are a super food that gives you superpowers.

At the beginning of the episode, the Titans play a game. Beast Boy shows up and says it's Cinco de Mayo. He tells the other Titans to bring spicy foods, but Robin refuses, admitting spicy foods are his weakness. The Titans then try to make him eat salsa. Robin dips a tortilla chip in it and takes a bite, but gets choked up and says it's too spicy.

Afterward, Beast Boy hands him an avocado. Robin enjoys it. The crime alert goes off; Robin goes off to fight Cinderblock alone. Robin figures out he temporarily gains power and energy from eating avocados. Later, when Cyborg tries to make a sandwich with avocados, Robin swipes and eats them, which annoys Cyborg. Robin then says he is going to plant an avocado tree so that way he can he could have more power, and leaves, saying "soon" creepily.

The next day, the crime alert goes off, altering the Titans of trouble at the Jump City Warehouse. Robin is nowhere to be found, so the other Titans go without him. When they enter the warehouse, it is full of avocados. The other Titans realize it's Robin! Robin explains his evil plan to make avocados the only food in the world, and then dumps a bunch of avocados on himself. They merge with Robin, making him the Avogodo! He reveals his plan to replace every crop in the country with nothing but avocados, "Avocado in Idaho! Avocado in Florida! AVOCADO EVERYWHERE!"

The Avogodo then goes to a grove of orange trees and destroys them, replacing them with avocado trees. The other Titans soon arrive at the scene and battle Robin as the Avogodo, but they lose. The other Titans then come up with a plan. They ask the Avogodo to try some guacamole. Unsure, he then asks what's in it. Beast Boy says avocados. To the Avogodo's excitement, he tastes it, but chokes up due to all the added spices. Robin shrinks to his normal size, but he still looks like an avocado. Back at the Tower, Robin is put in a cage until the effects of the avocado wears off. Robin apologizes to his friends for letting such a little marketing hype get out of control and sees super foods as a scam and asks for a glass of water. Starfire hands Robin the glass, and she and Raven, Beast Boy, and Cyborg go. After they leave, Robin drops an avocado seed into the glass and creepily repeats "soon" to himself.

The transcript for "The Avogodo" can be found here.