"The Metric System vs Freedom" 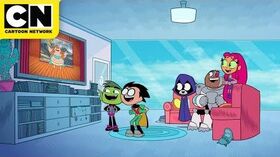 "The Chaff" is the twenty-fifth episode in the fifth season of Teen Titans Go!, and the two-hundredth-thirty-fourth overall episode of the series.

In an effort to get Teen Titans Go! cancelled, Control Freak shows off some deleted scenes.

The Titans are busy enjoying some singing puppets on TV, but the screen is suddenly seized by the contemptible Control Freak. Robin demands to know the meaning of this interruption, but apparently, the geek just wants to compliment their TV show, Teen Titans Go!. But of course, Control Freak is tricking them... like usual, he's planning on taking out the second-rate cartoon, this time through the use of deleted scenes. Freak's attempt to embarrass the Titans gets off to a rough start (which is him accidentally airing a dorky clip of himself in his underwear), but he moves past it and on to the first deleted scene...

In a crowded Jump City parking lot, Cyborg is attempting to park the massive Titan Robot between some cars. Despite his intense caution, mirrors are snapped off, and the Batmobile gets bumped (which gets cereal all over Batman's face). The Titans feel the clip wasn't too bad; sure, parking is kinda lame, but the audience is used to this type of mediocre content, so they continue watching.

So Control Freak moves onto the next clip: a really terrible CGI scene. Starfire explains that they were trying look all snazzy and expensive, but because of the show's incredibly low budget, all they can afford to do was transform into blocky, unappealing characters. Control Freak is overjoyed to see their ratings drop, but Robin and Beast Boy assure the villain that they'll always have a fanbase—their superheroes, after all. But that's a weak argument, though, as Control Freak shows with the next clip when they were fighing Brother Blood.

The team is gathered at the Titans Tower, where it looks like something seriously evil is about to go down. Apparently, Brother Blood is building... a giant robotic butt. The clip ends, leaving Control Freak severely disappointed in the plot. Even more disappointed is the audience, which has now dropped to a really low level. To completely extinguish the show, Freak continues the scrapped story: Brother Blood is about unleash a mind-controlling fart with his robotic butt, so the Titans take a trip back in time to stop him (thanks to a conveniently placed time machine). With the help of Raven's portals, they sneak up behind the highly suspicious Brother Blood and completely incinerate his robot butt—and his real butt. And that's the end of that battle.

This highly anticlimactic ending is just bad enough to get the show canceled. After this many seasons, the Titans can't believe it's all over. But Beast Boy and Cyborg aren't about to give up though... the two get down on a track called the Poop Song (about, unsurprisingly, poop). What IS surprising, though, is that this poop song brings back the TTG audience—the show is renewed! Control Freak angrily leaves the scene, and with nothing better to do, the Titans get back to singing about poop.

The transcript for "The Chaff" can be found here.