Teen Titans Go! Wiki
Register
Don't have an account?
Sign In
Advertisement
in: Episodes, Episodes focusing on all Titans, Parody,
and 15 more 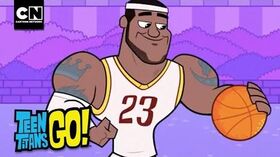 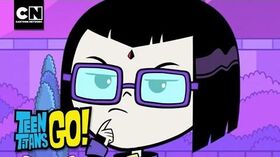 "The Cruel Giggling Ghoul" is the twenty-third episode of the third season of Teen Titans Go!, and the one-hundred-twenty-seventh overall episode of the series.

The Titans go to the Whack-A-Doodles Amusement Park to watch LeBron James but no one is there. The Titans find out what's going on.

One night, a two-headed ghoul watches the Teen Titans driving across a mountain road. In the T-Car, Robin expresses hope that the Titans are as excited as he is to see LeBron James' dribbling exhibition at Whack-A-Doodles Amusement Park. Starfire says she'd be more excited if it wasn't so late, but Robin claims they would have arrived sooner if Beast Boy and Cyborg hadn't insisted on stopping for food so much. Beast Boy notices that Raven is wearing glasses and asks what's wrong. She says that she lost her contacts and Beast Boy compliments her appearance, causing Raven to blush. Robin asks the Titans to look for the exit as he can't see through the fog. Starfire pokes her head out the window, but gets struck in the face with a road sign saying that Whack-A-Doodles is one mile away. The other Titans laugh as they see this as another incident of "Safety-Hazard" Starfire and Robin continues driving.

After arriving at Whack-A-Doodles, Robin hurries the Titans to the exhibition, but notice that no one else is there. LeBron James comes out on the stage, dribbling a ball, but falters when he sees the empty chairs. The Titans greet him and he thanks them for coming out, but asks where everyone else is. Suddenly, the manager appears beside them and tells them that they're all gone. LeBron James, unsettled, decides to dribble somewhere else. The manager explains to the Titans that all the guests left the moment the two-headed ghoul showed up. Beast Boy and Cyborg run off, terrified, but Robin stops them and says they aren't going anywhere until they solve the mystery. The manager tells them that no ghoul is scarier than the two-headed ghoul and claims the only people left are him, the owner, and two guests: Batman and Commissioner Gordon, who are on the bumper cars. The manager tells them that he'd ask the owner for help, but the owner would make millions from the insurance if Whack-A-Doodles shuts down which Raven says makes no sense. Robin volunteers and tells the Titans to split up and look for clues. Cyborg begins to refuse, but Beast Boy catches the smell of the snack shack and the two head there. Robin, Starfire, and Raven decide to check the owner's office for clues and fail to notice the two-headed ghoul spying on them from behind the bushes.

Beast Boy and Cyborg are eating giant sandwiches when LeBron James approaches them and claims that he can eat a sandwich his height. Cyborg doesn't believe him, but LeBron James swallows the sandwich whole. Beast Boy and Cyborg eat their sandwiches, but their stomachs begin to hurt. Disappointed, LeBron James decides to go dribble somewhere else. Cyborg suggests washing the food down with ice-cold pop and is handed a bottle by the two-headed ghoul. The two run off, but are chased by the ghoul throughout the amusement park. At one point, Cyborg disguises himself as the owner of a booth and goads the ghoul to play the game and win a prize. Beast Boy, disguised as Beast Babe, claims that his man will win. The two-headed ghoul wins, but Beast Boy's wig falls off when he kisses the ghoul's cheeks. Cyborg slams the ghoul with the prize and he and Beast Boy run off.

At Whack-A-Doodles Management Office, Robin, Starfire, and Raven are looking for clues. Raven finds something, but Starfire slips over a trash can. Raven reports that attendance has gone up since the bumper cars were installed which Robin says must have angered the owner if he wants to shut down the amusement park. The owner enters the office and demands that the Titans leave. Robin says the owner is acting like he's hiding something. Starfire agrees, and leans on the wall, activating a secret revolving door. Robin, distressed over Starfire's disappearance, tries to find the secret switch. Raven presses a rock that opens the revolving door and reveals stairs leading into a series of tunnels. As Robin and Raven navigate the tunnels, Raven theorizes that the access tunnels are being used by the two-headed ghoul to travel around the amusement park. Robin finds Starfire resting beside a pillar while a figure in a mascot costume approaches them. The mascot reveals himself to be LeBron James, who took the mascot costume from the nearby lockers because he always wanted to be one. He decides to dribble somewhere else. Robin notices that the lockers all have costumes, except for one and Raven spots four footprints leading to the empty locker. She states that she knew the ghoul had two heads, but not four feet.

Above ground, Beast Boy and Cyborg are wary of the ghoul when they bump into Robin. He demands to know where they were and they say they were running away from the two-headed ghoul. Robin tells them that they could use them to lure and trap the ghoul. Beast Boy refuses to be bait, but Raven goads him with a burrito. Cyborg says he'll do it for a burger, irritating Raven as they have to go to two different locations. At the bumper cars, Beast Boy and Cyborg loudly exclaim they're lost while Robin, Starfire, and Raven hide nearby. Cyborg calls the plan dumb when the ghoul approaches him. Beast Boy stutters while trying to alert him to his presence, but eventually says the word ghoul. The Titans gather around the ghoul, but it runs into the bumper cars.

Robin, Beast Boy, and Cyborg chase after the ghoul, but Starfire trips and Raven trips over her, losing her glasses in the process. She blindly enters the bumper car with the two-headed ghoul and it drives out of the attraction, followed by the Titans. Raven realizes that she is beside the ghoul and exits the car through a portal. The ghoul bumps into Robin, knocking him in front of Starfire's way. Beast Boy and Cyborg pursue the ghoul when it turns around and drives toward them. They look sadly at their food and throw their burrito and burger at the ghoul's faces. It veers off course and crashes.

Outside the Whack-A-Doodles Management Office, Robin unmasks the two-headed ghoul: revealing it to be James Gordon and Batman. Raven reveals she suspected she had heard the ghoul's laughter before while Cyborg asks why they would dress up as the ghoul. Robin explains that their favorite rides were the bumper cars and that it was becoming too popular. He says that if they scared the guests away from their favorite ride, then they would never have to wait in line. Raven suggests that, since they're both tied up, they should unmask Batman. Robin takes off the cowl, revealing Batman to be Bruce Wayne. He believes that the mystery goes deeper and unmasks Bruce Wayne, revealing LeBron James. LeBron James, dribbles past, and unmasks the fake one, revealing another James Gordon. Robin unmasks the first James Gordon, revealing Batman. LeBron James says they would have gotten away with it if it weren't for the meddling kids. The Titans, owner, manager, LeBron James, Batman, and James Gordon laugh while Beast Boy transforms into a dog and howls.

The transcript for "The Cruel Giggling Ghoul" can be found here.