Teen Titans
You may be looking for the Evil Dragon.

The Dragon is mystical creature from the board game "Dragon's Fire". At first, his existence seems to be imaginary, but he's soon revealed to the Titans in their adventure.

He debuted in "Riding the Dragon".

As the Teen Titans merrily walked though a medieval forest playing some flute tunes, they happened upon a ferocious, fire-breathing dragon. Beast Boy panicked, and Cyborg stated there was only one plan available...ride the dragon! The Dragon was on board with that plan, and Cyborg and Starfire hopped on. The Titans kept obviously repeating they were riding him, but the Dragon didn't get annoyed and kept on bouncing and flapping his wings to the beat. Raven and Beastie also climbed up on him, and they took off into the skies.

Well...not really. It's turned out the Dragon is a figment of the Titans imagination; he was really just the couch. A board game titled Dragon's Fire" was the inspiration for the beast.

However, near the end of the episode when the Titans had been sucked in to the game already, the Dragon for real this time showed up and really WAS extant. Once again, he courteously let the Titans ride him. He sang along and convinced Elf Boy to ride him as well. After congratulating the Titans on finding real magic, the Dragon was done playing around. It was time for the Titans to burn and fry.

Two versions of the Dragon are in the episode. In the beginning intro, the Dragon is portrayed as a monstrous, winged beast with red, scaly skin. His eyes are dark yellow, and multiple spikes protrude from his cranium, cheeks, and chin. Sharp teeth line the inside of his mouth, and he has four short, stubby feet coming out of his body. A spiked tail juts out from his back.

This version is revealed to just be in imaginary dragon. For the real characteristics, click here.

Later in the episode, the REAL Dragon stands up. He is basically the same as the figment, but with much more detail. He's darker in color, now more maroon than red, and his eyes look evil with the furrowed brow. The Dragon's wings are also more defined and sharp, and much more scales line his body. His teeth sharper, and the overall appearance of him is far more dangerous. 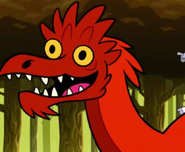 He's joined by Starfire in a nice position.

Song lyrics for the hit song "We're Going to Ride that Dragon".

This is what the Dragon really is- just a Couch.

Wow, he was just all fun and games...

Just an imaginary dragon from a game.

The Titans fantasize about riding him, but it'll never happen.

Robin doesn't have a clue what he's missing.

What a lovely ride that was! He loves the Titans!