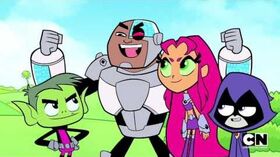 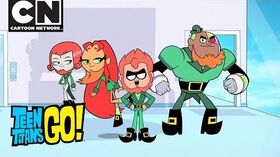 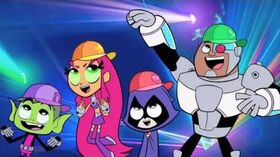 "The Gold Standard" is the sixteenth episode of the fourth season of Teen Titans Go!, and the one-hundred-seventy-third overall episode of the series.

It's St. Patrick's Day, and after wishing to become a leprechaun, Beast Boy becomes obsessed with gold.

The Teen Titans are planning to catch a leprechaun because they heard a leprechaun gives three wishes with the phrase "Fiddle de dee, tell me your wishes three." Instead, they catch Robin. They force him to change into a leprechaun so they can get their wishes. Although he tells them why he doesn't want to be a leprechaun, Beast Boy wishes to be one.

Beast Boy's wish then comes true, and then he sings Livin' that Leprechaun Life. Then Beast Boy wants to steal their cereal, and then he cobbles their shoes. He soon becomes obsessed with gold and then tries to change the economy. The four other Titans turn into leprechauns to stop him.

For some reason, Beast Boy tells three wishes: the first wish for them to wear hats. The second wish is for the hats to turn sideways. Then the four Titans want their hats to be turned backward as their last wish, but Robin doesn't want to waste it, so he wishes that Beast Boy could change back into a superhero.

On the way home, Robin remarks to Beast Boy that they can discuss the advantages of floating exchange. Meanwhile, the rest of the Titans decide to stay in the safe while paying attention to the gold inside as the safe door closes shut, and the lock turns itself as the episode ends.

The transcript for "The Gold Standard" can be found here.