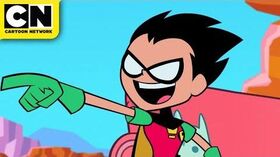 Robin takes the Titans on an educational trip to the Grand Canyon.

Dancing into the Titans Tower with a big smile, Robin's definitely looking forward to today's activities. The other four Titans merely stare at him unenthusiastically, even when he announces a trip to the Grand Canyon. Trying to build support, he tells them they'll be hiking, camping, and going in the whitewater. Failing to use context clues, Cyborg mistakes him for referring to the Clinton Whitewater scandal, so Robin clarifies that he meant rafting down the Colorado River (ending with Lava Falls). This doesn't really spark any excitement in the Titans, though... Beast Boy wonders why they'd even want to embark on such a challenge, and Raven explains that Robin's finding activities to temporarily satisfy his useless life. Robin, not denying that, asks the Titans if they really want to waste their one life on the couch, to which the Titans eagerly say yes. Realizing their unbreakable stubbornness, he hits a button that sends the couch blasting through the Titans Tower roof.

As the rocket ship couch lands in the Arizona desert, Robin warmly welcomes the team to the Grand Canyon. After a few seconds of amazement, the Titans head back to their comfy couch. But Robin's not letting them off that easy, though. He's got their whole trip scheduled, hikes, rafting, and everything. Cyborg complains about doing all this just to satisfy Robin's failure life, but it's to no avail. The Titans descend into the canyon, but only Robin's having a good time, as expected. They're parched and over packed (especially pack mule Beast Boy), and Starfire notes the dangerous path ahead. Robin's no baby, though—he confidently walks forward a few steps, only for the path to break underneath him. The Titans watch as his body plummets down the canyon. But, somehow, someway, he survives the death-ensuring drop.

Seven hours later, Robin congratulates the Titans on reaching the bottom of the Grand Canyon, but they look about ready to die. As he goes in to tomorrow's plans, Beast Boy announces that he's gotta go to the bathroom. Robin shows him a portable toilet, the Groover, but he mistakes it for a suitcase, and Starfire more bizarrely mistakes it for a person named "Grover". Robin explains that part of being in the wilderness is doing uncomfortable things, like pooping in a box, but the Titans aren't on board with that idea at all. When Robin announces that he's making tostadas tonight, Raven ends up crying, claiming that she hates everything about this.

At the next day's sunup, Robin wakes the slumbering for the next adventure: going down the Colorado River. Beast Boy's taken aback though when Robin loads up the Groover, too. No one wants to be riding in a raft alongside a box full of poop, but Robin brings it just in case. As the Titans take off down the river, Robin starts giving the team some info on the rocks surrounding them. His spirit for the layers of sediment is unsettling, to say the least... Raven angrily asks if he'll be blabbering about rock for the whole ride, and to the Titans' anger, he affirms this.

That evening at the campfire, and Robin's looking forward to the trip's climax tomorrow, Lava Falls. Across the camp, Beast Boy and Cyborg are chuckling, both wearing suits and carrying Groovers. The two "business mens" apparently have "business" to attend to, and the carry on with sickening allusions and farting. Starfire can't figure out what they're talking about, but Raven catches on... when the two slosh around their full suitcases, she has to hold back her vomit.

It's day three of the trip, and the Titans are sailing towards the rapids. Robin points towards the Wigleeva, two giant rock pillars that are the legendary guardians of the Havasupai Indian tribe. He enjoys talking about the rich history of the Native Americans, but the Titans digress about the taking of their lands. Robin tries uplifting the conversation, but the four Titans give him a severe guilt trip.

Around afternoon, Starfire, Beast Boy, Cyborg, and Raven are still in a bad mood, but Robin is feeling energized as ever—especially when they come upon Lava Falls. But when the four Titans take a look at the dangerous river-way, they instantly bail on him. Even Robin's feeling a little anxious, but Starfire comforts him, saying that he's still got "Groover" with him. Taking the bull by the horns, Robin braves the rapids, only to be dashed against rocks and nearly drown. Starfire feels they should maybe help him, but Raven says he pretty much deserves it...

Back at the Tower, Robin, who's covered in casts and bandages, admits the trip was dangerous and disgusting and vows to never challenge himself again. After Starfire and Raven congratulate him on having the mindset of a loser, Beast Boy and Cyborg bid the other farewell; holding Groovers, they crack a few more jokes about having some "business" to attend to.

The transcript for "The Groover" can be found here.