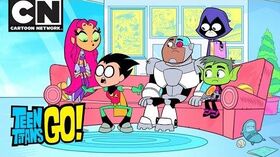 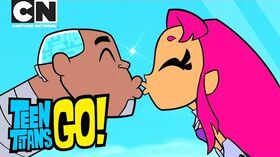 "The Inner Beauty of a Cactus" is the tenth episode In the fourth season of Teen Titans Go!, and the one-hundred-sixty-seventh overall episode of the series.

The Titans play "Spin the Bottle" as Starfire tries to improve her vocabulary through kissing. Something terrible develops throughout the episode which almost cost Starfire her capability of communicating.

The episode starts with Robin, Cyborg, Beast Boy, and Raven enjoying their glasses of water. After taking a sip, Robin compliments how water was the "nectar of the Gods." Cyborg says he loves cold glasses of water on a warm day. Beast Boy says he loves drinking water to stay hydrated, and Raven says she loves getting large amounts of water and holding it there so she could enjoy its flavor and takes a large sip while her cheeks enlarge into a ridiculous size. Suddenly, Starfire breaks down the door and enters the kitchen and alerts the other Titans that she has seen "the penguin," a "killer crocodile," and "the woman cat" loose in the city, causing the other Titans to spit out their mouths full of water and take charge. Thinking she was talking about the infamous well-known villains, The Penguin, Killer Croc, and Catwoman, Robin asks Starfire where she has seen them. Starfire tells him she will show him and blasts a hole with her starbolts through the kitchen wall.

In the next scene, Starfire leads them to the local zoo. Robin says he didn't see any sign of them. Starfire then says she has found them and points to an actual crocodile, actual penguins, and an actual lioness. Cyborg clarifies she was talking about actual animals instead of the villains. Starfire questions if she was misunderstood. Beast Boy responds she was and angered that he spit out their good water, which upsets the other Titans, leaving Starfire ashamed.

The next scene is back at the Tower. Robin, Cyborg, Raven, and Beast Boy are enjoying themselves in the living room while doing their activity: Robin lifting weights, Cyborg playing on his communicator, Raven reading a book, and Beast Boy keeping himself busy with one of those paddles that have a ball attached to it by a string. Starfire, with a sad expression, enters the room and falls flat on her face on the living room floor. Robin questions her actions, and she apologizes for ruining their water enjoyment by her earlier misunderstandings. Raven tells her misunderstands are normal and that she should not worry about it. Beast Boy agrees and says he loves it when she talks badly. Starfire admits she wished she talked clearly and normally like they do.

Robin warns her if she changed the way she talked, it will affect who she is as an individual. Cyborg adds it isn't something that she could perfect overnight. Starfire says she could, due to her Tamaranian ability through developing other peoples' speech and languages through lip contract. Excited, Robin asks her if she was talking about kissing, and she nods her head. Then Robin claims if Starfire wants to communicate more clearly, as friends they should help her. Starfire gets excited, but she can't decide whose speech patterns to pick up because she thinks they all sounded appealing.

Cyborg suggests they could play "Spin the Bottle" to help her decide. Robin agrees and rushes, desperately find a bottle. He finds a soda bottle in the fridge and quickly joins the other Titans back into the living room. Annoyed, Cyborg tells him to calm down, and Robin shouts at him by telling him to calm down. Robin spins the bottle, and it lands on a cactus. Cyborg and Beast Boy teasingly tells him he has to kiss it. Raven puppets the cactus and have it flirt with Robin. Robin kisses it but gets pinched by one of its needles. Beast Boy laughs and claims he has a crush on it. Robin disclaims and says he's way too attractive to date a cactus. The cactus pinches Robin for the second time and Robin, in pure anger, throws it out the window.

Next, it's Starfire's turn to spin the bottle. She spins, and it lands on Beast Boy. They kiss, and she now sounds and acts exactly like him. She seems happy, and Robin has a near breakdown as he runs to the kitchen to cry very loudly.

In the next scene, Starfire (with Beast Boy's voice) flirts with Raven while she's sunbathing and talks to Cyborg about auras and metaphysical flow. Unfortunately, they don't understand. Defeated, she returns to her normal voice and walks away. In the next scene, Starfire is still down that even with Beast Boy's voice everyone couldn't understand her. Raven consults her that she shouldn't try to change her voice, but she is insistent, and Robin suggests another game of "Spin the Bottle."

Robin thinks he has the perfect formula for the bottle to land on Starfire. He spins first landing on the cactus. The others make fun, and Raven again puppets the cactus, and they make him kiss it, poking him and causing great pain. Next, it is Starfire spins the bottle again, and this time it lands on Cyborg. They kiss, and she gets his voice and his personality and rushes off to go watch "Family Matters" and excitedly talk about Urkel. She then goes into a long rant about two characters confusing Beast Boy and Raven. After she realizes she failed again, she goes back to her normal voice.

Raven still says she shouldn't change her voice, and Robin (who fell on the cactus with his lips) agrees, but Starfire rushes out to kiss nearby beings, including Sticky Joe, Pain Bot, and Birdarang. She starts to short out, and Raven explains that with each new personality, her old one disappears, and they all rush out to stop her from kissing anyone. Robin catches her, and she tries to kiss him. The other Titans yell not to do it, and he resists saying that Starfire shouldn't kiss him (and not just because he and the cactus have gotten serious) because they love her the way she is. The episode ends with her announcing that "the killer crocodile," "the woman cat," and "the penguin" were behind them. Raven says that they're not falling for it, which leads to the four getting attacked by the real villains from behind, and Starfire ends the story with "That's ridiculous" that she has learned from Birdarang.

The transcript for "The Inner Beauty of a Cactus" can be found here.