You do not mess with The Jeff!

The Jeff, or simply Jeff, is a male alter-ego persona of Starfire. He makes his debut in the episode "I See You".

Then later on in the episode "Garage Sale", a man in a yellow shirt buys the mask at the sale.

In Starfire's disguise, she wears a male mask while still wearing her usual attire. The mask has pale, pink skin, a large, pink nose, white hair, white eyebrows and a white mustache. It hides her long, pink hair. 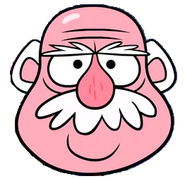 Add a photo to this gallery
Retrieved from "https://teen-titans-go.fandom.com/wiki/The_Jeff?oldid=430642"
Community content is available under CC-BY-SA unless otherwise noted.