The Joker is a psychotic criminal from Gotham City. His appearance and personality is that of a clown, and he pulls tricks and assassinations that are deadly and clever. He is the archenemy of Batman, although he plays a minor role and makes occasional cameos in Teen Titans Go!.

The Joker was once a standard criminal who was foiled by Batman whilst in a chemical factory. During the struggle he fell into a vat of chemicals. This accident bleached his face white, dyed his hair green, turned his lips blood red, and gave him a permanent smile, transforming him into the Joker. His disfigurement also made him lose his sanity, and he would go on to become one of Gotham City's most feared super villains.

Joker made his debut in "Real Boy Adventures", in the song "Real Real Boy". The Joker was one of the characters who sang the song, while cheering on Cyborg.

Joker appeared in the episode "Pyramid Scheme", as he paid money to Raven, Cyborg and Starfire. His next appearance was in "The Titans Show", where he was revealed to be one of the viewers in Control Freak's summer event.

Joker made a cameo appearance in the episode "The Streak", where he was shown to be beaten by Kid Flash and then shown in the song "It's Not About the Parts", locked up alongside Slade, The Penguin, The Riddler and Mr. Freeze.

In "TV Knight 2", he and The Penguin were invited to watch TV with Batman and Commissioner Gordon. When Alfred caught them, the Joker and Penguin escaped. He then appeared at the end of the episode bringing coffee for Batman and Commissioner Gordon, while The Penguin brought them a huge umbrella, to protect them from the rain. Then the four of them share a hearty laugh.

Joker appeared in a flashback, where he was shown to be captured by Batman and Robin, laughing all the way to prison.

In "Bat Scouts" he was reading 101 Killing Jokes, when the Titans, minus Robin, trespassed into Arkham Asylum and chased them off. Later, he was shown to be terrorizing the people of Gotham City. Nonetheless, he was defeated by Cyborg, who did the Batusi, which cringed The Joker. Cyborg then punched him into a street light pole, causing The Joker to faint. He and his cohorts were teleported back to Arkham.

In "Egg Hunt", Joker and the rest of the inmates were freed by the Titans, who could search the asylum in peace.

In "Pig in a Poke", Joker made his speaking debut. He scammed Starfire by pretending to be a prince online, and used her money to buy the whole Axis Chemicals as a place to make a giant whoopie cushion filled with his patented toxin. Although he managed to figure out the Titans' tricks against him when they initially confronted him, he soon got outwitted by Starfire who feigned her injury. In the end, he was forced to return her money, had his whoopie cushion plan foiled by her and the rest of the Titans and ended up being enslaved by her in her shop as punishment.

The Joker usually dresses in purple, custom made clothes. He has a light green undershirt and a yellow flower, which shoots acid. He has white skin, a pointy nose, and green hair. His overall appearance is based on a clown, as his name implies.

Joker's cameo on the screen.

The Joker (On the top)

Beast Boy dressed up, imitating the Joker, with Cyborg as Batman.

joker on the taco truck

The different versions of The Joker on a cereal bowl 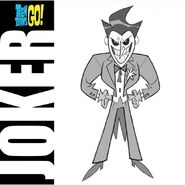 The Joker vs Robin

The Joker vs Alfred

Robin dressed as The Joker

Is this your card?

Joker's poster next to the door

Suicide Squad version of The Joker

Joker in Teen Titans Go To The Movies