The Metric System vs Freedom

The Metric System vs Freedom

"I Used to Be a Peoples" 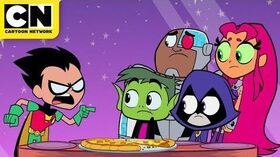 "The Metric System vs Freedom" is the twenty-fourth episode in the fifth season of Teen Titans Go!, and the two-hundredth-thirty-third overall episode of the series.

Robin teaches the other Titans about the difference between the Imperial System and the Metric System.

It's pizza time at Titans Tower, and Cyborg's feeling really thirsty. Beast Boy goes to grab him a liter of soda, but before he can hand it off, Robin utterly annihilates the bottle. There won't be any liter-drinking, metric nonsense while he's the leader—only the random imperial system of measurement is acceptable. Robin cherishes the individuality of America's imperial units... he'll never go along with the evil scientists who are trying to establish a world of metric system uniformity. After eating some "tight muffins" baked using the imperial system, the Titans couldn't agree with Robin more. Someone hiding in a nearby bush doesn't seem to agree, though...

The next morning, Beast Boy, Cyborg, Raven, and Starfire are shocked to hear Robin looking for a "kilogram of eggs." For some reason, he's betrayed his American freedom and gone over to the metric system. After he feeds them disgusting, metric-made muffins, the Titans figure Robin's been corrupted by scientists. He blows this accusation off, but Robin has been acting all sciency lately. After some rigorous research, Raven realizes that "metric" is an anagram for "tric me." This can mean only one thing: scientists have tricked Robin into their dirty metric ways. The team decides to follow Robin on his revolting 5K to see what he's really up to...

Near the end of the 5K, the fatigued Titans notice Robin mysteriously dart into an abandoned structure. They quickly follow him into the building—an abandoned lab. To get to the inner sanctuary, where Robin is hiding, they'll need to pass three deadly antechambers. Each room boasts a challenge of metric knowledge; since the Titans have next to none, they end up covered in darts and flattened like pancakes.

Once the Titans reach the supreme sanctum, they find a bunch of wicked scientists at work and their master sitting on her throne. Seeking to convert them to the metric system, she orders a brainwashed Robin to attack his team. He immediately starts beating them with a meter stick, but Raven reminds him that he's an individual... an American! Freed from his psychosis, Robin orders the Titans to bake some imperial muffins. After tasting them, the scientists instantly start tripping, allowing the Titans to overwhelm them. As for the leader, she morphs into a muffin, and Robin squashes her.

The team rejoices, and Robin thanks them for rescuing him from the metric system. To celebrate their American individuality, he then chugs a gallon of milk waving, and the United States's flag...

The transcript for "The Metric System vs Freedom" can be found here.