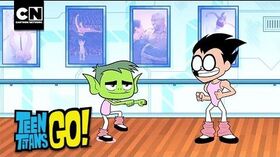 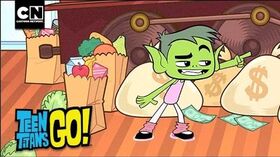 Raven teaches the other Titans how to dance properly, but soon, they are captured by the Dance Demon, who teaches them "forbidden moves" from an ancient book of dance.

The episode starts with the Titans (except for Raven) dancing some horrible dance moves to some terrible music with Beat Box and Birdarang. Raven shows up and informs them that their dancing is terrible. They inform her that even though it's terrible, it's fun. Robin asks what she knows about dancing. She takes off her cloak and performs her stunning dance moves from "Legs," with some new ones. They are quickly impressed, and she offers to teach them how to dance. After changing into awesome dancewear (plus some awesome butt dancing from Robin), she shows them a few moves, but she soon learns they have no rhythm, so she calls upon the Dance Demon. He gives her a book called The Power of Dance and tells her not to go to the back of the book as that is where the forbidden dances are.

After a quick montage of them learning, Raven is happy with their progress and goes to take a break. Then Robin suggests that they do the forbidden dances. The others worry about the Demon's warning, but they conclude that he wouldn't be mad. Beast Boy does the shopping cart, and toaster waffles show up out of thin air. They all become excited, and Robin (who is now eating the frozen waffles) says that the Dance Demon must have not wanted to share, so he kept the moves secret. They all do some pretty 80's dance moves that come to life (The Sprinkler, Running Man, Cabbage Patch, etc.), and then Raven comes back. She asks if they had finished the forbidden moves, and they all make up some lies, except for Beast Boy, who says: "Yeah, we read it." The Dance Demon comes back and says now they're good enough to be his backup dancers and possesses them before taking his leave.

Raven then takes Beat Box and Birdarang with her to act as her backup dancers as she travels to the Dance Dimension to save her friends. Once they get there, they must dance (Fighting doesn't work here) their way through the crowd. After making it to the stage, the Dance Demon offers her a deal. A dance-off; if she wins, she gets her friends back, but if he wins, he gets her great dance moves. She accepts, and a dance-off ensues, but unfortunately, he succeeds. Once she is stripped of all rhythm, Raven remembers the one dance that takes no rhythm or skill at all. The Overbite, aka the horrible dance the Titans were doing at the beginning of the episode. She manages to get the whole crowd doing it and defeat the Dance Demon by getting him to do and free her friends, they all do a group hug, and Raven admits that dancing isn't about being good, it's about having fun. The episode ends with the Dance Demon laughing one last time.

The transcript for "The Overbite" can be found here.