Tara Strong (in Bumgorf only)
The Penguin (Oswald Cobblepot) is a special minor villain in Teen Titans Go! who makes his first appearance in "Real Boy Adventures". He is a villain in Gotham City and an adversary of Batman.

Oswald Chesterfield Cobblepot was born to the aristocratic Cobblepot family, with nobility going as far back as Newcastle, England.

As a child, he was bullied for his obesity, appearance, and birdlike mannerisms, as well as the fact that his overprotective mother, Esther, always made him carry an umbrella for fear that he would die of pneumonia, regardless of the weather conditions. Oswald was given the unwanted nickname "Penguin" by his peers, since he was born with a hip ailment (most likely due to being obese), which caused him to waddle, and for having a beaky nose. He also has a signature squawking laugh similar to a penguin's quack.

Because he was bullied, Oswald's only true childhood friends were his family's pet birds. He loved and cared for them dearly.

Eventually, Esther became very old and sick, and later died. Her birds were then repossessed by the bank. Angry and hurt at what had become of his life, Oswald took on the moniker "The Penguin" as a nickname to be feared, seeking revenge on all whom had wronged him. He took up martial arts such as judo and ninjutsu, even training in Asia at one point, and began turning his umbrellas into deadly gadgets like flamethrowers, helicopter blades, and machine guns. This eventually led to him becoming the feared criminal mob boss known as the Penguin.

Penguin has also studied ornithology in college, even knowing more about birds than his teachers, which led to him setting up an aviary (with most of the birds being stolen).

Penguin is in his early 30s and his birthday is July 26th.

He also owns a nightclub known as the Iceberg Lounge, with illegal operations going on in the back room after hours.

Penguin enjoys drinking red wine and tea, and eating raw fish (which he sometimes swallows whole). He is also a heavy smoker and often carries a cigarette holder.

Penguin is usually followed by a swarm of hired goons, most of which are women (whom he often flirts with). He has also been known to work with the Riddler, the Joker, and Catwoman.

So far, all of his appearances in "Teen Titans Go!" have been cameos.

He is seen in the crowd singing along at Batman's concert in "Real Boy Adventures".

His sharp teeth are a reference to his incarnation in "The Batman (2004)", his long, slick hair is from "Batman the Animated Series (1992)", and his sickly pale skin, flipper hands, and fluffy coat are from "Batman Returns (1992)".

The Penguin is a short, obese, and deathly-pale man. He has a large, beaky Roman nose, slightly-pointed ears, wicked-looking eyebrows, a double chin, and sharp teeth. His hair is long and black with a slick look to it. His hands are flipper-like with severe syndactyly.

He wears a monocle, a tuxedo, dress shoes, a top hat (which was originally purple but is now black) and a fluffy coat.

The Penguin Chanting with Gizmo and The Riddler.

The Penguin (On the left of Robin) 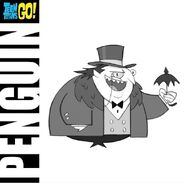 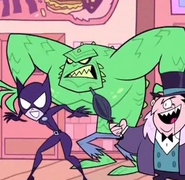 Add a photo to this gallery
Retrieved from "https://teen-titans-go.fandom.com/wiki/The_Penguin?oldid=437810"
Community content is available under CC-BY-SA unless otherwise noted.