The Power of Shrimps

The Power of Shrimps

"My Name is Jose" 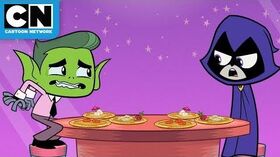 "The Power of Shrimps" is the seventh episode in the fifth season of Teen Titans Go! and the two-hundred-sixteenth overall episode of the series.

Aqualad uses shrimps and prime rib to win back Raven.

Taking a break from crime-fighting, Beast Boy and Cyborg are hanging out at the Jump City Boardwalk. The two have stopped at the shrimp shop Berto's, where Cyborg is joyfully devouring a pile of shrimps. Beast Boy can only look on in disgust, trying not to throw up at the sight of his shrimp slobber. To Cyborg's delight, Berto the manager dumps another shrimp mound in front of him, but Beast Boy's reluctant to eat them. After a sensual shrimp rub and hard slap from Berto, he seems ready to eat one, but Beast Boy stays strong in his vegetarian ways.

While Berto and Cyborg are glorifying the power of shrimps, Aqualad bursts onto the scene, horrified to see that his shrimp basketball team has is being served as snacks. When Cyborg wonders what the deal is with him, Beast Boy jokes that he's still sad about Raven leaving him. Trying to hide his tears, Aqualad claims he's protecting the ocean and has not time for that nonsense. But Beast Boy, pointing out that he couldn't even save his shrimp buds or win Raven over, roasts him nice and toasty (with "sick burn!" backup from Cyborg). After the two Titans leave with swag, Aqualad crab-cuffs Berto for cooking up his friends, but the shop owner is cool with it.

Across the waters at Titans Tower, Robin's hunkered away inside a pit in the center of the living room, playing (and losing) a game of solitaire. As Beast Boy and Cyborg walk in, wondering what's going on, Robin explains that he's accepted he'll be alone forever, and so he's now embracing his life of loneliness. Turning away from the crying, pathetic loser, Beast Boy tells Raven he met up with Aqualad. She could care less about either him or Beast Boy though, and Cyborg well-deservedly calls out that sick burn.

Down at the underwater Aqua Lair, Aqualad's busy making out with a pic of Raven, but Berto keeps interrupting him about some stupid story. He unwillingly submits to hearing his tale about a stray cat at his house. Apparently, Berto tried getting that said cat to like him with some kibble, but eventually the feline was hit by a car. Now the cat is in his jacket at all times, encased in an immovable cast. Aqualad sees no correlation between Berto's story and his problems with Raven, but Berto has an idea: he'll make shrimps and prime rib for him, who can then feed them to Raven on a date. To Aqualad, that's not that bad of an plan...

Just as Aqualad has finished setting the table, Raven teleports to his dining hall, an angry look on her face—Aqualad had invited her over for a dinner date? Figuring he's just caught up in a rivalry with Beast Boy, Raven turns to leave. However, the scent of shrimp and prime rib is too much to ignore. Aqualad woefully remarks that one of the shrimp was his racket ball partner, and that's when Raven realizes he really does care for her. From a nearby window, Berto shakes his head, glad to see his shrimp cooking skills are paying off.

Back at the Tower, where Beast Boy, Starfire and Cyborg are playing a board game, Robin playing with himself in the pit of despair, slowly losing sanity. Raven enters the living room with a flower in her hair, and while Beast Boy at first likes it, he's horrified to learn she got it from Aqualad. Grabbing onto her cloak in sorrow, he proclaims that he cares for her, but she has a hard time remembering those nonexistent moments. Once again heated by a sick burn, Beast Boy is wracking his brain for ideas to win Raven back. Starfire and Cyborg suggest also serving her shrimps and prime rib; with an inability to cook, he heads off to Berto's.

Unfortunately for Beast Boy, the only person he finds at the shrimp shop is Aqualad. He fills Beast Boy in on Berto's incarceration—and also the fact that he's cooking meals for him and Raven. As the realization hits Beast Boy like a pound of bricks, Aqualad enjoys ridiculing him. Having already recruited Berto for cooking, Beast Boy will have to resort to using his personality. After Aqualad cruelly roasts him for not having one, he bids the lonely goblin farewell.

Beast Boy's no quitter when it comes to Raven, though. With the help of well-dressed waiters Starfire and Cyborg, he sits Raven down to a nicely-decorated dinner in the Tower dining room. The entrées are less than stellar: store-brought baby carrots, pre-packaged tofu cubes, salted crackers, and a fancy looking turnip (not to eat). Raven passes on the meal, as the food AND company's better at Aqualad's. After getting sickly burned by his two waiters, Beast Boy leaves the room in tears. He then hears a faint, lonely voice from below... Robin! The pitiful hermit advises Beast Boy to give up like he did. Insecure of his happiness, he proclaims he's learned to play the flute, but starts blubbering after blowing only few notes. Frightened at what a sad loner Robin has become, Beast Boy has his mind set on getting Berto's help on winning Raven back.

Meanwhile, Raven's down at the Aqua Lair, scarfing down a bunch of shrimps and prime rib. It's clear she's mainly interested in the food. Back in the kitchen, Cyborg, Starfire, and Beast Boy barge through the wall to rescue Berto, but first they must endure one of his pointless stories about 1493 Krbava. After Raven goes demonic on Aqualad for more food, he heads off to the kitchen, only to find the Titans breaking Berto out of there. Using his aquatic powers, Aqualad and his team of sea animals charge at the Titans. However, they stop dead in there tracks when Raven enters the kitchen, angered to see that Berto is the true source of the delicious shrimp, not Aqualad. Seeing this as his chance, Beast Boy offers Raven a dish of "scrimps", but he's declined immediately. Berto points out that the magic of shrimps & prime rib isn't in the taste, but in the effort making them. Appreciating the cook's insight, Raven turns to Beast Boy and Aqualad, intent on punishing them for their lack of effort and caring...

It's a nice night out at the Titans Tower, complete with some relaxing flute music from outcast Robin. Aqualad and Beast Boy are busy cooking up shrimps and prime rib for Raven and Berto's luxurious dinner. Taking a bite of shrimp, Raven remarks on how you can really taste the love. Cyborg, Starfire, and Berto shout out 'bout that super sick burn!

The transcript for "The Power of Shrimps" can be found here.