The Powerpuff Girls are a small group of three superheroic little girls from the rebooted cartoon with the same name. They make their debut in the crossover episode with Teen Titans Go! in "TTG v PPG."

The Powerpuff Girls were created by Professor Utonium in an attempt "to create the perfect little girls" using a mixture of sugar, spice, and everything nice. However, he accidentally added a large dose of Chemical X into the mixture, creating three perfect little girls and granting all three superpowers.

In "TTG v PPG", The Powerpuff Girls made their first appearance in the series. They visit the Teen Titans in Jump City to warn them about a dangerous villain whom escaped and is on the loose. Robin, Starfire, and Raven are surprised by their sudden visit to which Starfire questions who are "the odd floating coordinated children". Robin, hearing the PPG Narrator tells them they are The Powerpuff Girls. Blossom, surprised, and asked how he knew. Blossom then asked the Titans if they seen Mojo Jojo and tells him he is dangerous. Robin, ignoring their threat, teases them and assumes they came to them for their help because they are "tiny helpless babies". Raven adding on how their parents may be worried sick about them and how they will keep an eye on them once they show up.

Frustrated, the Powerpuff Girls reject their assumptions and explain to them they are not babies and in fact their were superheroes. Raven announces playfully they can be anything when they grew up. Blossom whispers to her sisters what were wrong with them. Blossom then asks the Titans if they were good at their jobs. Raven butting in says it sounds like a "challenge", in which Bubbles questions her. Starfire tells Robin and Raven that "the babies" are there to prove which superhero team was superior. Confused, Blossom says it is not a competition but the Titans insist that it was.

Blossom: She has long orange hair tied up into a ponytail pinned with a heart-shaped hair clip and she wears a huge giant red bow on top of her head. She has pale skin and has huge, round bright pink eyes. She wears a bright pink dress with a black stripe in the center along with white tights and shiny, black shoes. She is 'Everything nice' as well as the leader of the team.

Bubbles: She has short blonde hair tied up into two pigtails that are tied together with two blue hair ties. She has pale skin and has huge, round blue eyes. She wears a blue dress with a black stripe in the center along with with tights and shiny, black shoes. She is the 'sugar'.

Buttercup: She has short black hair. She has pale skin and has huge round green eyes. She wears a green dress with a black stripe in the center along with white tights and shiny, black shoes. She is the 'spice'.

"You are tiny, helpless babies."

Blossom ogles at Robin for calling her "a tiny helpless baby."

"What's wrong with these guys?"

The Powerpuff Girls in Lego

The girls' original name. It was changed for obvious reasons. 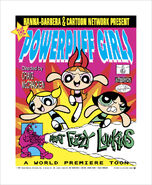 Poster for the first What A Cartoon! pilot. 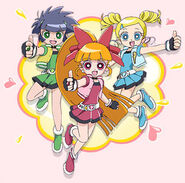 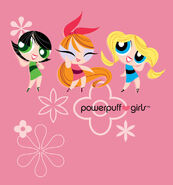 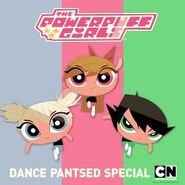