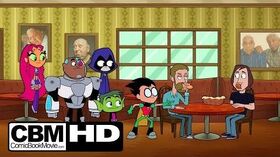 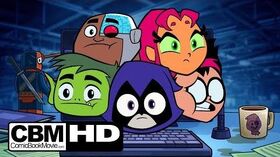 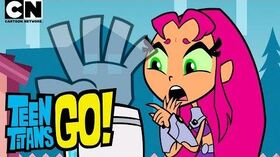 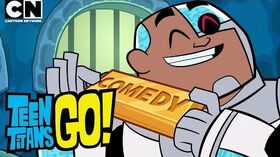 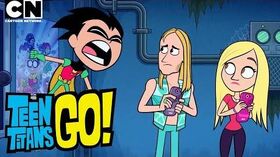 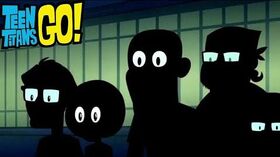 Part 1: When their world starts disappearing, the Titans must confront their creators at Warner Bros. Studios.

Part 2: The Titans learn how difficult it is to make a cartoon when they try to animate Michael Jelenic and Aaron Horvath.

The episode starts with the five Titans sitting on the couch, doing nothing. They decide to wander around the room but are shocked to see other rooms disappearing. Soon, the whole living room starts fading away as well. This forces them to go through the fourth wall, and they end up at the Warner Bros. Studios. There they meet the whole Teen Titans Go! Crew. They are soon taken to meet their voice actors. All seems to go well, but a screaming contest breaks out between the two parties after calling them liars, causing the Titans to be kicked out of the studio.

They soon head to San Pedro in California to find Michael and Aaron. They go to Michael's house, and his father welcomes them. At first, they have a great conversation, until the Titans argue with Michael's father, causing him to order his pets to fight back. Frightened, the Titans retreat quickly, before Michael's father shouts that he wants them to come back.

Meanwhile, while they're walking to Aaron's house, parts of their bodies start to disappear, so they rush quickly to his house. A little boy opens the door; Beast Boy asks the child where his dad is, and he tells them that his dad's "pooping". The child introduces himself and his younger sister before he decided to play with them, with him being the protagonist while the Titans will be the antagonists. Again, they asked where his dad is, while the child still gives the same answer. Shortly, the child transforms into a dinosaur; Robin claims that it's the power of make-believe. The Titans confront the "dinosaur", but they are beaten.

Meanwhile, the Titans start accepting that they're just make-believe. Suddenly, their bodies start disappearing as they freak out. The episode ends with a "To Be Continued..." caption on the screen.

Part 2 begins with the Titans freaking out as their bodies start disappering, but they seem to be stable, but not for much longer if they don't find their creators. They head to a bread restaurant where a bunch of other sad sacks hang out as their last meal before they're faded out completely, and they just so happen to stumble upon Michael and Aaron! But their good fortune is short-lived, as they’re beleaguered by their heavy schedule and want nothing more to do with the show.

The Titans then set out to make the 200th episode themselves, with the help of the show’s crew of course. They write a rather lousy script (mostly about Michael and Aaron farting), but the episode is somehow how able to be produced nonetheless. The Titans are amused by their creation, but Peter Rida Michail tells them that it won’t fly with the audience and refuses to give them a do-over and called security to kick them out of the studio again. They consult Michael and Aaron again who mock their failed attempt and tell them that make-believe only becomes real if there’s actual quality to back it up and something like the idea of making a 200th episode featuring themselves and families in it would ruin the boundaries of good taste, Much to their sadness.

Later, the team return to their world where they prepare to accept their fate, as they fade along with the rest of the tower. But all hope is not lost, as farts start to sound, and miraculously, Jump City reappears, along with our heroes! The Titans think that Michael and Aaron must've realized they're forever interconnected, and they celebrate as the crew sing about their accomplishments in “Work On An Episode”.

The transcript for "The Self-Indulgent 200th Episode Spectacular!" can be found here.