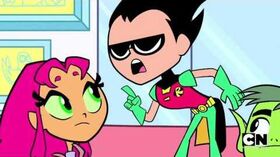 "Think About Your Future" is the thirty-ninth episode of the third season of Teen Titans Go!, and the one-hundred-forty-third overall episode of the series.

The Titans become reckless with their money and health, much to the detriment of their future selves. Therefore, the elderly Titans decide to travel back to the past to change the habits of their young selves.

The episode starts off with Starfire, Cyborg, Raven, and Beast Boy doing their own individual thing on the couch, when Robin pops up from the floor and tells the four that he has exciting news. Robin tells them that he wants the Teen Titans to have team jackets. Starfire, Cyborg and Beast Boy agrees with him, however Robin adds that the team jackets have to match each other's jackets. Raven, on the contrary, says that they can't just pick a decision like that, but the other Titans disagree with her and she eventually goes with their decision. Denim and leather sleeves with the Teen Titans logo on the back and the jacket wearer's name was going to appear on the jackets.

After the jackets got sent to the Titans, the five started wearing them, and they start to show much affection towards it. After showing the poses they could do with the new team jackets, Cyborg suddenly blurts out that they all should have pizza. Starfire, Robin, and Beast Boy agree, however Raven again says that they should all eat healthy. Beast Boy then asks her why they should all eat healthy, and she says that they all wouldn't have health problems...later. Starfire then comes up to her and basically tells Raven that it is the 'now' that is important, not the 'later'. Raven agrees and they all eat a lot of pizza on the couch.

Another idea then comes up to Robin, saying that they should all get team jacket pizza tattoos, with Beast Boy saying that he would get a dragon tattoo. The four-Cyborg, Beast Boy, Robin, and Starfire head towards the elevator, with Raven staying out. She says again that the Titans are making bad choices now, and that they wouldn't have problems...later. Beast Boy then says that no one will care for the later, and Robin says that Raven should think about what tattoo she's going to pick. Succumbed to peer pressure, Raven eventually follows the five.

Then fast forward to 70 years into the future where the pelican is possibly deceased, inside the tower we see a elderly raven coming out of the kitchen with a large sandwich. She trips over herself and says that she can't stand upright, only to say that she is joking since she can fly and uses her telekinesis to re-conjure the fallen sandwich. She then pretends she can't see the beef in the sandwich, which she reconfirms that she's once again kidding because she has glasses. Elderly Starfire chuckles on how elderly Raven's jokes never get old. In the meantime, old Robin is glad that one of them is in good spirits though old Cyborg misinterprets the leader's message and thinks that he's seeing the spirit of Carol (probably his dead wife) until he realizes it's his friend, old Beast Boy (who refer him as a knucklehead), calling for his help after falling off a scooter. Old Cyborg extends his arm to pick old Beast Boy up and slightly scolds the latter, and the latter replies with that his legs don't work so good anymore and shows the former his filthy feet that has flies surrounding it, disgusting the former who puts him back into his scooter. After old Cyborg reminds old Beast Boy again, the latter tries to show off but falls off again. Elderly Starfire remembers that it's time for medications, yet when she's about to fly, old Robin pulls her down and tells her that they've run out of money. As old Cyborg and old Beast Boy mourns over than squandering during their youth, the other elderly Titans also atttempt to remember the good times during their teenage but they still feel regretful over their past decisions. Elderly Raven reprimands her friends of neglecting the consideration of "later" though it takes her awhile to explain the definition of "later". Then old Cyborg suggests going back in time, which old Robin delightfully agrees by squeezing the former's loose cheeks, however he quarrels with old Beast Boy who thinks the time is three o' clock. He announces "Titans, Go!" but it isn't easy for them to get out of the living room thanks to their old age.

On the other hand, while Beast Boy is possibly hiding behind the couch, Robin, Cyborg and the girls are helping themselves with boxes of pizzas, waffles and other junk food. Cyborg is having his pizzas, Robin handing a bottle of mustard to Starfire and Raven lounging on the couch using her telekinesis to hold a packet of snacks so as to feed herself. All of a sudden, the elderly Titans arrive via their time machine, catching the young Titans' attention. The door soon opens, with the elderly (who now has white nosetrials, bald head, wheelchair, wrinkly hands and face) exit, astounding the five teenagers. Taking off his hands from his face, Cyborg and Starfire are shocked to see their old counterparts, though Raven expresses her gratification on meeting the elderly version of herself and kisses her counterpart's cheek.

Robin then realizes that the elderly must have time-traveled and guesses that the future must be in danger, but his elderly self specifies that their reason is to save themselves from... THEM! Cyborg believes that it's cool, however old Cyborg rebukes his young self by blaming the latter's poor eating habits has caused them poor health, hitting open young Cyborg's chest, showing the undigested hotdog and chicken leg. Elderly Starfire then tells them that the squandering of their money has resulted them unable to pay for their medication, revealing an empty dusted container with a spider inside. Old Beast Boy mourns that he can't even get off his scooter. As Elderly Raven prompts the teens to make a better future for them, Beast Boy still doesn't care, which angers old Robin who declares that he and the other elderly will teach them how to make wise decisions.

Elderly Raven proclaims that if the present Titans made bad decisions now, then the Elderly Titans won’t be here later, even though she says that living like they said is boring. Robin realizes this and orders the Titans to do dangerous and unhealthy hobbies. They successfully make their future selves disappear (some are affected by the decisions the present-day Titans do). Robin congratulates the Titans and enjoy the rest of their lives while they last.

The transcript for "Think About Your Future" can be found here.