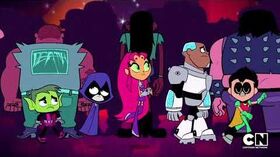 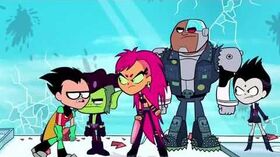 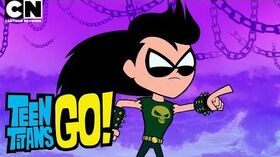 "Throne of Bones" is the forty-first episode of the fourth season of Teen Titans Go!, and the one-hundred-ninety-eighth overall episode of the series.

When the other Titans start listening to heavy metal music, Robin warns them of the dangers.

The episode begins with Robin telling the Titans all about smooth jazz. He tells them that it is the best fine art of music in the world and leads them into an amphitheater where musicians will be playing smooth jazz music. Instead of that slow, calming music they expected earlier, they end up with people who are screaming, hissing and even getting very rough with each other. The other Titans soon discover what the concert really is. The crowd starts throwing stuff and making a fuss, and it's not long before Starfire, Raven, Beast Boy and Cyborg fall under the spell of Heavy Metal Rock. On the other hand, Robin is trying to escape the flow of the angry mob in the amphitheater in a very cute scared voice saying that that was not what he had expected tonight and grabbing the other Titans, he escapes from the amphitheater via his grapple gun.

The next morning, Robin is in the kitchen with his alto saxophone, playing some smooth jazz until the other Titans, who are now in their new death metal attire, come into the room screaming just like the people at the amphitheater did. Robin warns them about the dangers of heavy metal and how it can tremendously affect them, as well as suggesting some smooth jazz to start off this calm morning. However, the others insist that they are "metal" now. Robin makes them an awesome breakfast of bacon and eggs and sausage, but instead of eating and chewing slowly, the metal Titans start throwing the food, eating messily and even breaking the furniture.

Meanwhile, in the garage, Robin plays some smooth records to calm their metal down a bit. He asked the Titans if they knew what records were, but they don't seem to care, unfortunately, and play a heavy metal record that is actually a secret portal. Robin follows them and it leads them to a whole new heavy metal dimension with chains and more heavy metal. All of a sudden, a Heavy Metal Demon starts to rumble, thunder and boom majestically. The four metal Titans, spellbound by the heavy metal music, call the demon their new leader and Robin doesn't know what to do. Then the demon disregards Robin by saying that he is not metal enough and banishes poor Robin back to the garage. Luckily, he has a plan!

With some METAL transformations and new do's, Robin is READY to take down that demon and save his friends from the latter’s manipulation. Nevertheless, the others seem to pretend not to know him. Starfire then says after that they take orders from "HIM!" (referring the demon) now and Beast Boy then chimes in that they’ve got a new leader already. It is an all out heavy metal battle now and Robin used his guts and willpower to go through the challenges that he has to face. His biggest challenge is to face "the pit". Raven claims that no one has EVER survived the pit, but Robin says that he CAN DO IT! The Titans are very shocked when Robin manages to DO IT though and breaking from the manipulation of the demon, they join Robin and try to finish the demon off with heavy metal. Unluckily, the demon overpower them and Robin’s guitar breaks during the process.

Then the demon asks what Robin is gonna do now considering that he is not metal now. Robin replies with a confident heart, "Who needs an ax...when you got a sax?". He begins playing a smooth tune on the sax which hurts the demon’s soul, leading the others to break free from the heavy metal curse that Robin has warned the Titans about and causing the demon to age-regress back to an infant. Robin now learns that you don't have to be smooth or heavy to be included, as what everyone needs now is good jazz. Everyone thanks Robin and he replies with "smooth". Robin is now the King of Rock and he tells his fellow metal-heads that he learned that it doesn't matter what type of music you're into; what matters is that you can appreciate a good jam. He happily and self-indulgently plays some jazz music. The episode ends with a befuddled skeleton guy saying "smooth" as he winks at the viewers. .

The transcript for "Throne of Bones" can be found here.