Teen Titans Go! Wiki
Register
Don't have an account?
Sign In
Advertisement
in: Episodes, Season 4, Episodes focusing on all Titans,
and 6 more 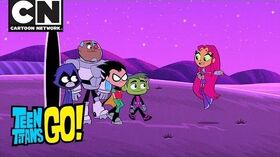 "Titan Saving Time" is the fifteenth episode of the fourth season of Teen Titans Go!, and the one-hundred-seventy-second overall episode of the series.

Starfire takes the Titans on a mission to find out what became of the missing 2 o'clock hour during Daylight Saving Time.

The episode opens up in the dining room, where Beast Boy, Starfire, and Raven are eating vanilla ice cream sundaes, but only reluctantly. Cyborg says if they don't finish their ice cream, they will not have any vegetables. Beast Boy and Starfire get upset to hear that. Cyborg replies that vegetables only for people who eat their ice cream. Raven doesn't want to eat the cherry. Cyborg replies she must eat the whipped cream, chocolate syrup, and nuts as well. Raven then tries to push her ice cream around to look like she ate some. Unfortunately, Cyborg sees through her trick and says that it's not going to work, Beast Boy says he does not want any more ice cream, and he wants veggies. But Cyborg refuses and insists on watching them eat their ice cream; they eventually eat their ice cream without looking at it once. After they've done, Cyborg gives them vegetables (this results in a montage of Beast Boy, Starfire, Raven, and Cyborg eating vegetables). Later, the four sit on the couch with Beast Boy saying the vegetables were so good, Starfire adding she liked the collard greens, Raven noting the sweet, sweet potatoes are exquisite and Cyborg explaining that he does love some good vegetables.

Robin then enters wearing some PJs, telling his fellow Titans that it is bedtime, but Cyborg complains that their bedtime isn't for another hour. Robin tells them it's Daylight Saving Time, but they take it literally as "Daylight Savings Time." After Robin explains it to them, Beast Boy thinks a farmer took the hour, so the Titans (except for Robin) plan to stay up and catch the farmer. The Titans see the clock at 1:59 and wait for it to become 2:00, but instead of going to 2:00, it skips one whole hour to 3:00, making the Titans all freak out.

Robin asks what's going on, and Starfire says the time skipped from 1:59 to 3:00. Robin (who still doesn't believe it) says it's the whole point of Daylight Saving Time, but Raven asks about Robin's messy room. Robin says it's just a messy room, but Starfire still wants to investigate. So she and her Titans go to a farmyard, and she says that this is where they will find the 2:00 hour, but Robin angrily asks the others not to harass some poor farmer. Beast Boy insists he will. Starfire reveals the farmer has a dog, and Bingo is his name—O. Beast Boy, Raven, and Cyborg sing "B-I-N-G-O." Starfire repeats what she is saying and tells her Titans to follow her to the 2:00 hour.

The Teen Titans (after passing chickens, pigs, and cows) reach a cornfield where they find the clock tied in ropes, and Robin admits he is wrong. Starfire sets him free, but as they escape, Beast Boy accidentally picks up some booby-trapped corn, which alerts Old McDonald. He uses his spear to pin the clock, then claps his hands slowly and evilly. Starfire yells at him to give the clock back, but McDonald calls in his animals and orders them to kill the Teen Titans. They easily defeat McDonald's creatures, but he claps his hands slowly again. This calls his dog Bingo, and McDonald yells: "and Bingo was his NAME-O."

McDonald orders Bingo to kill the Teen Titans (and briefly drool on Robin). Starfire says she shouldn't have saved the clock, but out of nowhere, Daylight (McDonald's arch-rival) barges in, gives McDonald and Bingo their comeuppance, saves the clock, and escapes into the sky. As he goes, Starfire says: "What a wonderful conclusion."

Robin then apologizes for doubting as he thought it sounded stupid, adding that he will believe in anything. Cyborg then puts a hat on and says, "Bingo!," ending the episode.

The transcript for "Titan Saving Time" can be found here.