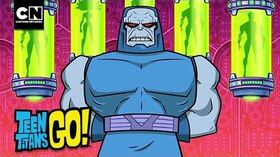 Part 1: The Titans visit the Hall of Justice to use the pool, but then decide to check out the inside.

Part 2: The Titans must save the members of the Justice League from the clutches of the super villain Darkseid.

The episode begins with Robin informing the other Titans that today would be special in some unknown way. Shortly after he says this, the air conditioning unit breaks down to Robins point. Feeling hot, he guides the others to their pool to cool down. Although Cyborg accidentally destroys the pool in an epic cannonball splash, Robin encourages this as it leads on to something special. Beast Boy suggests they go to the Hall of Justice to cool off.

Arriving at the fountain, the Titans cool off in the Hall of Justice's fountain, and Cyborg criticizes them for the horseplay. He also reveals his dream of joining the Justice League, and Robin takes him to the door to meet them, where the four ding-dong-ditch him. However, they learn no one is home and the five let themselves in.

Once inside, Beast Boy eats Batman's sandwich with an alarm in it, summoning a security robot to execute them. After a brief chase scene, Cyborg leads the team to the Hero's dressing rooms and disguises Robin as Batman, Beast Boy as Martian Manhunter, Raven as Wonder Woman, Starfire as the Flash, and himself as Green Lantern. Once the robot busts into the closet, it identifies Raven as Wonder Woman for her legs but can't identify the others. After having the robot chasing them around, Cyborg uses his magic ring to summon the Golden Girls to fight it off to its destruction. After the battle, Robin informs the group that Darkseid had captured the Justice League on Apokolips and there's another part coming. On top of that, it makes their day more special.

The second part of this episode picks up right where the first part left off, with the Titans standing around the Justice League's computer monitor. Robin explains to the Titans that Darkseid (not THE Dark side) is the most dangerous villain in the universe, powerful enough to defeat any hero that faces him. The Titans agree to travel to the planet Apokolips to rescue the Justice League from his evil clutches. Cyborg insists that they remain wearing the Justice League's costumes, to honor the heroes that they aspire to be. The Titans go to their vehicles to fly to Apokolips. Raven gets in Wonder Woman's invisible jet, she tries to control it, which doesn't work out too well... In the process of pressing and pulling invisible levers and buttons, she destroyed the other vehicles, so the Titans had to squeeze into her jet.

After a flight, the Titans finally arrived. They went inside this lair, and there he was the almighty Darkseid. His voice was deep and scary, making the Titans coward in fear. Well, except for Starfire, she gave him cold medicine, and his voice turned into a nice, goofy, friendly voice. Cyborg points out that his voice sounds like Weird Al. Darkseid then states that Weird Al is evil for making parodies of great songs. This causes the Titans to get mad, so they attack him. Darkseid easily beats the Titans, well, except for Cyborg. He Bea Arthurs him. The Titans cheer that they saved the Justice League and that the Justice League will so allow Cyborg! After all, the celebration Cyborg goes to get the tanks. When he goes over, one of the tanks falls, murdering the member in the process. They all get disgusted faces trying to accept that a member of the Justice League was murdered. Then Robin had an idea if Cyborg traveled around the world really fast, the world goes back in time, like what Superman did. Cyborg does, which changes time, and he goes and saves the tanks, well, another fell, murdering the person in the tank. After many times, Cyborg is eventually can save them all!

Later on, we see the middle-aged Titans, excluding Cyborg, at the Justice League headquarters. The Titans run up and ring their doorbell, running around hiding behind the fountain, chanting quietly, "Ding-dong ditch!" Cyborg comes out now as a part of the Justice League. He sees the Titans and chases them laughing.

The transcript for "Two Parter" can be found here.