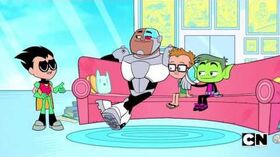 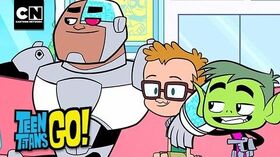 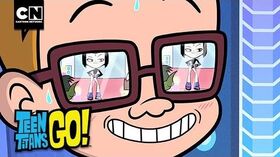 The gang meets their biggest fan — a child named Wally T. Raven says that the mere presence and the intense admiration from a single fan multiplies and augments their strength and abilities greatly.

As the episode starts, Cyborg, Beast Boy, and an unknown random boy are sitting on the couch. Beast Boy and the boy are playing video games, while Cyborg is relaxing. Robin suddenly comes in and greets Cyborg and Beast Boy, and then notices the boy sitting between them. Robin asks who he is and looks at him in suspicion, and the two refer to the boy as 'Wally T', even though his real name is William Walter Thompson.

As Robin finishes hearing the aggravating and annoying 'Wally T' pronunciation songs coming from the two, he asks them why he was here. Beast Boy and Cyborg laugh that Robin does not know about Wally T, and the two say that he's a number one fan of the Teen Titans. Robin opposes the thought and states that everyone calls the Teen Titans now as an abomination. The two highly agree, with Beast Boy saying that Wally T is the only person who does not think of them as a complete failure.

With that idea however, Robin goes to Wally T and asks him if he doesn't consider the Teen Titans garbage, and Wally T gives a shrug. Robin smiles happily and starts to piggy-back Wally T as the four headed to the kitchen.

Before entering, Raven and Starfire come out of the kitchen, and Raven asks who the boy Robin is carrying was. The three tell her that it was Wally T, a huge fan of Teen Titans Go! After telling them, Starfire interrupts saying that 'Wally T is no boy', and Raven agrees with a comment of 'he's all man.' The two start making cat noises at Wally T and the fan starts to take a liking towards Raven's. The two start to look at Starfire as she makes dinosaur noises instead of seductive, completely satisfactory noises.

Robin pushes the two apart, and exclaims that Wally T was really the number one fan of them, and Raven states that the strong belief of fans "gives them their strength", which makes Robin highly doubt that statement. Raven tells the team that true fans give regular heroes so much power and strength. Robin, doubting still along with Cyborg, suddenly gets surprised as Raven suddenly yells 'catch' and manages to teleport a police car above him, which was intended to squish him; however, Robin carries it with a bright yellow aura around him, greatly increasing his natural abilities to superhuman levels tenfold.

Both Robin and Starfire get impressed by the power of Wally T, with Raven adding 'Oh yes, and being this close to him is making us even stronger!' Raven also mentions 'Look how strong he's making me now!' and cat growls at Wally T, again, with Robin pushing him and Raven apart.

After the incident, Beast Boy suggests to the Titans that they should all respect Wally T as a king because of the strength he gives to them all. The Titans agree, and Robin starts a 'Titans Fan-tour' with Wally T tagging along them.

Instead of Wally T actually going to look at the awesome and cool behind-the-scenes stuff, the Titans show him the...

BATHROOM! Amazing, is it not?

The Titans show Wally T the bathroom utilities, however, Raven adds on with a 'We always run out of toilet paper!' comment. Robin tells the Titans that they waste the toilet paper by making 'mummy wraps', and he looks at them all in despair. Beast Boy teaches Wally T how to make mummy wraps, which annoys Robin even more. Robin says that from now on, they all have to use two squares from a toilet paper. Before moving on to the next 'Titans fan-tour' room, Robin's communicator beeps on and it says that Gizmo is attacking Jump City with his robot army! Scary!

The Titans and Wally T, head to Jump City, and starts to face off the evil robot army! Now with Wally T, the Titans are more powerful than ever! The five pass each other the fan, and they all show off each of their cool and new superpowers!

After battling, Beast Boy states that they should get more fans, because he wants them all to get stronger. Robin agrees with the idea, also stating that to get more fans, the 'Focus Testing' plan begins!

Going back to the Tower, Robin says that he will show Wally T numerous images and clips of them from previous episodes, and will rate each of them: either 'hate' or 'love.' The Titans leave the room with the clips playing on a T.V, and Wally T mostly like Beast Boy and Cyborg saying “Waffles”, Starfire's (especially when she keeps on using “the”), and especially Raven's clips (mainly because of her sourpuss attitude, ha ha...), however, he hates Robin's clips (apart from his butt jokes though).

After the series of clips, Robin is disgusted by the results of the ratings, with Raven saying that if they pander shamelessly, it could have disastrous consequences! Yikes!

But Beast Boy says they need more fans to get more fan power. Robin orders the Titans to recreate Wally T's favorite moments, but Raven reports that Wally T left. (So sad.) Robin checks the Fan Tracker to see how many new friends they acquired, but the Titans are shocked to see that... uh-oh! It has lowered to zero! Raven says that while trying to get new fans, they have lost the only one they had.

Then Robin's communicator reports that Gizmo has returned with another robot army and the Titans travel to confront him on the streets of Jump City. Robin tells Gizmo to give up, but he aims his robot's weapons at them. The Titans are unable to summon their powers as they lost their strength when Wally T left them and are crushed by Gizmo's robot. However, Wally T arrives, providing the Titans with enough strength to emerge from the robot. Raven claims that he returned because a true fan will stick to them no matter how terrible they become out of a sense of obligation and duty. Wally T agrees with her and gives his "fan strength" to the Titans, allowing them to harness and defeat Gizmo and his army. The Titans thank him for helping them and they sing him a song to thank him for being their fan.

The transcript for "Wally T" can be found here.