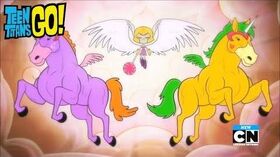 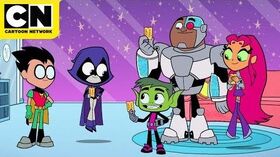 "What's Opera Titans" is the thirty-third episode in the fifth season of Teen Titans Go!, and the two-hundred-forty-second overall episode of the series.

Robin surprises the Titans with a trip to the opera, but they soon fall asleep, and all dream about starring in their own operas.

It's TV time at Titans Tower, and the Titans are all geared up: popcorn (courtesy of Cyborg's mouth), new batteries for the remote, and a comfy couch. They're about to watch Toilet Cop—a movie about a cop turned cyborg toilet—but like usual, Robin interrupts the fun. This time though, he's got something good... tickets to the opera! Having never experienced such high-class entertainment, the Titans enthuse over the erudite performance. They arrive at the opera house, but as soon as the singing starts, the team dozes off...

Starfire starts to dream about being dressed in a cat suit, alone in the alleys and near starvation. She expresses her sorrow through operatic meowing, and Robin (also in a cat suit) joins the pity party. A garbage truck drops a box of gourmet treats, and the two cats start grappling over them. The fight escalates when they both start using extremely dangerous weapons systems. Unfortunately, a huge explosion reduces the kitty treats to dust, so neither of them get nourishment.

Meanwhile, Raven is dreaming about a relaxing tea party with Butterbean and Sparkleface in the Pretty Pretty Pegasus world. Suddenly, Gumdrop Goblin invades their get-together, nearly stomping the three of them out. They escape into the clouds, but the monster quickly pursues them. It's a big mistake, though—Raven and the two pegasi evolve into mighty warriors, then proceed to attack him. After a brutal battle, the three friends end up using Gumdrop Goblin's head as a teapot.

Somehow, Beast Boy and Cyborg are sharing the same dream; they're seated at a fancy dining table, eating some broccoli and a hamburger with dainty etiquette. A huge serving dish starts descending to the table, and once it touches down, the two Titans lose it: they break into a funky dance complete with Cyborg rubbing hamburgers on himself and the two admiring a hot broccoli body...

Robin's dream takes him back to his sidekick days with Batman. When the Caped Crusader leaves the Batcave for some rest, Robin starts fooling around with his mentor's super high-tech belt. It's filled with gadgets galore, but the Boy Wonder quickly loses control of it and ends up wrecking the lair. Batman's clearly furious, but luckily for Robin, Alfred is stuck with the cleanup.

The opera is interrupted when Robin starts laughing in his sleep, so the Titans are kicked out of the hall and back into the Tower. It's okay, though: they may not be high-brow enough for the opera, but they can still watch Toilet Cop!

The transcript for "What's Opera Titans" can be found here.