What We Learned at Camp

What We Learned at Camp 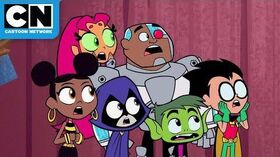 "What We Learned at Camp" is the thirty-eighth episode in the fifth season of Teen Titans Go!, and the two-hundred-forty-seventh overall episode of the series.

After not receiving participation medals, the Titans must demonstrate what they learned at camp.

On the final day of Superhero Summer Camp, everyone has gathered around a large stage for the camp award ceremony. The Titans are super excited—they haven't done anything award-worthy, but the camp counselors will be giving everyone participation medals. Amazingly though, the Titans aren't even worthy of THAT—Birdarang notes that they haven't participated at all this past week, and so he can't give them any medals.

Seeing that their self esteem is destroyed, Bumblebee tries to cheer the Titans up, but Cyborg shuts her down... right now, they just want to wallow in their tears. Unexpectedly, the other camp-goers' medals start glowing and overtaking their minds. Trigon suddenly appears, apparently bent on dominating the summer camp. When the demon sees the Titans without any medals, he commands all of the mind-controlled heroes to attack them. Luckily, Raven teleports the team out of there.

The team is in panic mode: both about Trigon's takeover and no participation medals. Robin has a brilliant idea: they can use the skills they've learned over the past four days to stop Trigon, while also proving they deserve some participation awards. Starfire points out that their self esteem is still dwindling, so they have to make do with some false confidence about the plan...

Though the Titans' tactics to save the camp are a bit weird, including Robin's meaty thighs from "The Bergerac," ravenous wolves from "Campfire!," and the Creepy Catcher from "Snot and Tears," they actually work pretty well. Once they come face to face with Trigon, the Titans employ the most important thing they learned in camp: plundering piracy from "Forest Pirates!" The mind-controlled camp-goers rush the Titans' ship, but they're no match for the swashbucklers' sword slashing and slippery scat.

Despite this, Trigon overpowers the team and blows their ship up. He starts roasting the Titans on their lack of participation and self-esteem... but Bumblebee's not gonna have any of that... This week, she got to be a member of the terrific Teen Titans, and Bumblebee's pride in that fact gives her enough power to defeat Trigon!

It's the end of Super Summer Hero Camp... in addition to finally getting their participation medals, the Titans' also get a permanent addition to the team, Bumblebee! And a new edited title sequence!

The transcript for "What We Learned at Camp" can be found here.