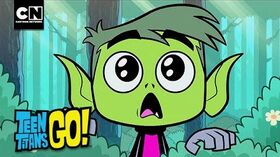 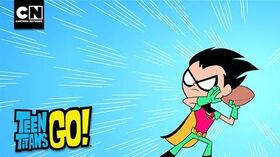 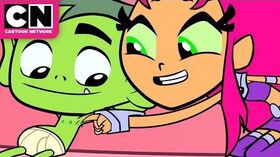 "Who's Laughing Now" is the forty-seventh episode of the third season of Teen Titans Go!, and the one-hundred-fifty-first overall episode of the series.

With manliness achieved (thanks to armpit hairs), Beast Boy is ready to find his spirit animal, which will teach him important life lessons about the real world. But Beast Boy pays no heed to Cyborg's warnings about picking a good and affordable animal and chooses some bears. Soon, he falls into debt. The only way to get out of the hole is a fierce match of football against a team of bears.

Inside of the Titan Tower's bathroom, Beast Boy is taking a shower while practicing his rap skills with some soap (you know all the Titans do). Heading to the sink, he overflows his toothbrush and uses it for one brush only. When he goes for the deodorant, he notices 3 tiny strands of armpit hair and rushes out to tell the other Titans.

Robin strokes it, and Cyborg also loves the new hair. Robin exposes his own pit hair, and Cyborg, not being able too, brandishes some wires, and together, they do a welcoming dance for Beast Boy's initiation into the club. Starfire tickles his hairs lovingly, which grosses out Raven severely. Starfire says it feels like a soft kitten, and proceeds to purr while petting Raven.

Beast Boy says that the disgusted hero should be happy for him... he's not Beast Boy anymore, but Beast MAN. Starfire inquires what exactly do men do, and Cyborg answers with driving fire trucks, Robin with weightlifting, and Raven with showing pit hair in public. But Beast Boy, climbing the couch, proclaims he needs to find a spirit animal. Starfire gasps, saying he shouldn't be seeking ghost animals, but Beast Boy explains, while still in his underwear, that a spirit animal teaches major life experiences to help survive in the real world. Basically, they are college for animal dudes.

Robin thrusts his support to Beastie, but Raven points out that it's expensive. Robin says that if he chooses the right animal, the door to success will open. Beast Boy agrees, looking for him and his pits the easy path. Starfire moves in to cuddle his hairs and Robin joins, but Cyborg then bores everyone to death by going over economic fallacies with using a spirit animal. Beast Boy cuts him off... he NEEDS a spirit animal. Starfire offers Silkie to his face, making ghost noises with him, but he declines the larva. Robin proposes going on a tour to find the best choice, so they all hop to it.

In a temperate forest, filled with a wide biodiversity of elephants, wolves, crocodiles, and many more (most of which don't even live in forests), Beast Boy is searching for the perfect animal. A horn frog leaps up, and Cyborg puts it up for suggestion. Tossing out that idea, he hears distant growling. Peeking through a bush, Beast Boy sees a trio of grizzly bears playing and grazing near a mountain.

Captivated by the winking bears eye, Beast Boy excitedly chooses the bears. Cyborg again chimes in with his wisdom about cost prices. A 2 year mangy donkey could serve as a good start off spirit animal, but Beast Boy says donkeys are lame (donkey lowers head in sadness), and that he's only interested in bears.

Approaching the group of napping bears, Beast Boy wakes them up and introduces himself and his motives. An orange-ish bear lets out a loud roar, so Beast Boy tries to simulate it with a sissy "grr". The bear growls once more, and Beast Boy again tries to imitate, this time performing a little better. Another reddish brown bear roars at him a third time, and Beast Boy successfully mimics the ferocious sound (but follows with a wimpy, questions "roar"? The youngest bear lets out an acceptance growl, and Beast Boy is overjoyed at the news. The bears just scratch themselves and fart.

Raven asks how the enrollment went when Beast Boy returns, and he excitedly reports that he's in. He repeats their conversation of roars verbatim, but with excess saliva. Robin asks if he's for real, and Beast Boy confirms it. Starfire is happy for him, but Raven wonders if he really wants to live in the forest. Beast Boy corrects her, swishing it up with a twig and making flies descend upon the Titans. It's scat (performs a little scat jig, because why not), and he only knows that because it's his major.

Starfire is proud of him, and so is Robin, but he asks how he plans to pay for it. It's all covered, beast Boy says, with a loan of honey and salmon from a governmental agency. It's a hefty amount to pay back adds Raven, but Beast Boy says he'll be rich when he's a full on bear. Another one of Cyborg's lectures takes place, in which he informs him that it might offer good pay, but not the skill sets needed for later in life. Beast Boy ignores the advice, transforms into a green bear, and, getting sassy with a hand up, leaves to join the bears.

When he arrives back at the "campus", the three bears are having a wild party. He asks if they should be studying, but the orange bear just drops a football in front of him. A little fun won't hurt, Beast Boy assumes.

They head out to a field, where the bears close in on Beast Boy and tackle him to the ground. As more torment, the bear starts chomping on his leg, and no flag for unnecessary roughness is thrown, because it's bear ball, not NFL.

After the game, Beast Boy, aching from the lunch of his leg, is offered to play some more football. Beast Boy sheepishly says he's not into sports, and that he's here to learn. But he is instantly slapped. Beast Boy yells at the orange bear, saying that although he may like sports, he, on the contrary, has to study. But he's interrupted with a mean growl, and then a football is thrown at his face.

A little while later, Beast Boy is reading his spirit animal book under a tree when the other bears start annoying him with their loud football playing. The brown bear calls him over form a bush, and Beast Boy, thinking it's a lesson, gleefully heads across. However, it's just orange bear pranking Doctor Light and his picnic lunch. Creeping up on him from behind a bush, he rips the villain to shreds. Beast Boy disappointingly looks on as carnage flies by. The bear comes back with a lunch basket. Did Beast Boy really pay all that fish and honey for this?

The Titans, in the meantime, have prepared a gift basket for Beast Boy with clothes and goodies. Robin suddenly steps in poop though, and Cyborg notifies him of the rules; he's now Scat Man, and is required to do the scat dance. After a superb performance, they applaud him, as does Beast Boy who is nearby sitting on a rock. He says it was a nice dance, as he majored in it, and starts to sing the song a bit but just ends it with a "phht". Starfire asks how it's going, and Beast Boy complains that the others just wanna party, play football, and steal pick-a-nick baskets. Robin corrects him: it's "picnic". He refutes that, and Raven says the word again. Beast Boy is annoyed, and has the Titans sound it out using a pickaxe (pick), A (short vowel sound) (i) and Jolly Old Saint Nick (nick). They still get the pronunciation wrong (well, really, RIGHT), but he just gives up... he should have listened to Cyborg and got a rental. Cyborg lets loose his classic Booyah, and Raven says his lesson is learned. Unfortunately, he still has to pay back all the honey and salmon, so the government will now proceed to kill him. But Cyborg has a plan... take the food BACK from the bears by beating them at their own game. Robin asks if it's education, but Cyborg angrily yells out that it's football.

Jets fly over the clearing for the Bears vs Titans match. Robin, at the 50 yard line, recites the rules: whoever wins gets the salmon and honey (terrible deal for bears). The orange bear agrees with a loud roar, paralyzing Robin in fear. A whistle starts the game, as a bear catches the starting kickoff. He slashes Robin away and leaps over Cyborg to score the first six points with ease. The weak quarterback, none other than Robin, is sacked before he can pass. A while later, Cyborg is tackled, but extends his arm to barely reach the end goal. Starfire blasts the rushing orange bear and makes him fumbles via explosion. The score is 28 to 21 Bears as Beast Boy catches a punt but is then crunched. Running back, Raven uses her teleportation to get some nice yardage. After more slamming, the whistle calls the two minute warning, with the score of 35 to 34, still Bears lead.

Huddled up, Robin proposes a field goal kick. Beast Boy examines the vast amount of yards across and deadly bear defense, saying it's unthinkable. Cyborg cheers him on though, stating that he has a good 2 year spirit animal degree behind his belt to make that kick. Beast Boy, pumped up, transforms in to a cheap community donkey and back leg-kicks the football bears towards the goal post. It's a score, with added effect of the goal shattering by the bears.

With the three points hoisting them above, 37 to 35, the Titans win! Beast Boy is paraded by the four, cameras taking his picture all over. They head over to gloat to the bears and demand the food loan back, so the brown bear literally regurgitates a pile of green mush, fish, bones, and jars.

Beast Boy is flabbergasted, and then Cyborg gives one final lesson about the danger of spending thousands of dollars on an education you can get for much less. The only thing that spirit animals have to offer is a mound of debt and a cheap diploma. Raven inquires if the bears really were cheating them, and Beast Boy yells out that they were.

But he doesn't need them, and rips off his shirt to show off his manly pit hairs. Robin admires them, and he, Cyborg and Starfire join him in doing an armpit hair dance, but the whole thing just makes Raven gag.

The transcript for "Who's Laughing Now" can be found here.