Donna Troy, also known as Wonder Girl, is a sister and sidekick of Wonder Woman.

In Teen Titans Go! to the Movies, she makes a cameo during Batman's movie premiere sitting next to Martian Manhunter in the theater. Later, she is seen in Robin's dream. After his defeat from Slade, Robin goes home and falls asleep. That night, he dreams being introduced by Batman to the other heroes with her being one among them.

In "The Bergerac", she has her speaking debut. During the said episode, she becomes momentarily smitten to Robin during her summer camp stay. After Robin manages to defeat her ex-boyfriend (who is also Robin's enemy) Lumberjack, she and Robin share their only kiss before leaving the Super Summer Hero Camp for good.

Wonder Girl has wavy black hair, pale skin, and blue eyes. She wears a red suit with golden stars, and a belt with the Wonder Girl symbol on the buckle, and golden calf length boots. 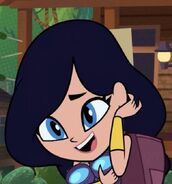 Add a photo to this gallery
Retrieved from "https://teen-titans-go.fandom.com/wiki/Wonder_Girl?oldid=403600"
Community content is available under CC-BY-SA unless otherwise noted.